Mahindra’s Felix Rosenqvist took a wheel-perfect win in today’s Berlin ePrix, snatching victory from pole-sitter Lucas Di Grassi, with Mahindra team-mate Nick Heidfeld rounding out the podium. Championship rival Sebastien Buemi fought back from fourteenth, a series of confident overtakes bringing his Renault e.Dams home in a hugely-credible fifth place. After qualifying strongly on the second row, Mahindra Racing capitalised on an excellent start for both drivers, to achieve a double podium, a first win for the team, and maiden victory for Rosenqvist, making it a day to remember for the Indian marque.

As the lights went green for the longest race in Formula E’s history, the Mahindra pair of Rosenqvist and Heidfeld got off the line quickly, capitalising on a poor start from Lopez that cost him two positions, seeing the DS Virgin down into fourth place, as the Mahindra pair sped past. Di Grassi’s lead remained intact, and he immediately began to build a gap. Daniel Abt had a positive start, gaining a position from Vergne, to take sixth, while Sarrazin – in his first race for Techeetah – took twelfth place from Piquet. Mitch Evans rued his luck, as his Jaguar limped into the pits with a technical issue, and rejoined the race several laps down, before being forced to change into his second car. 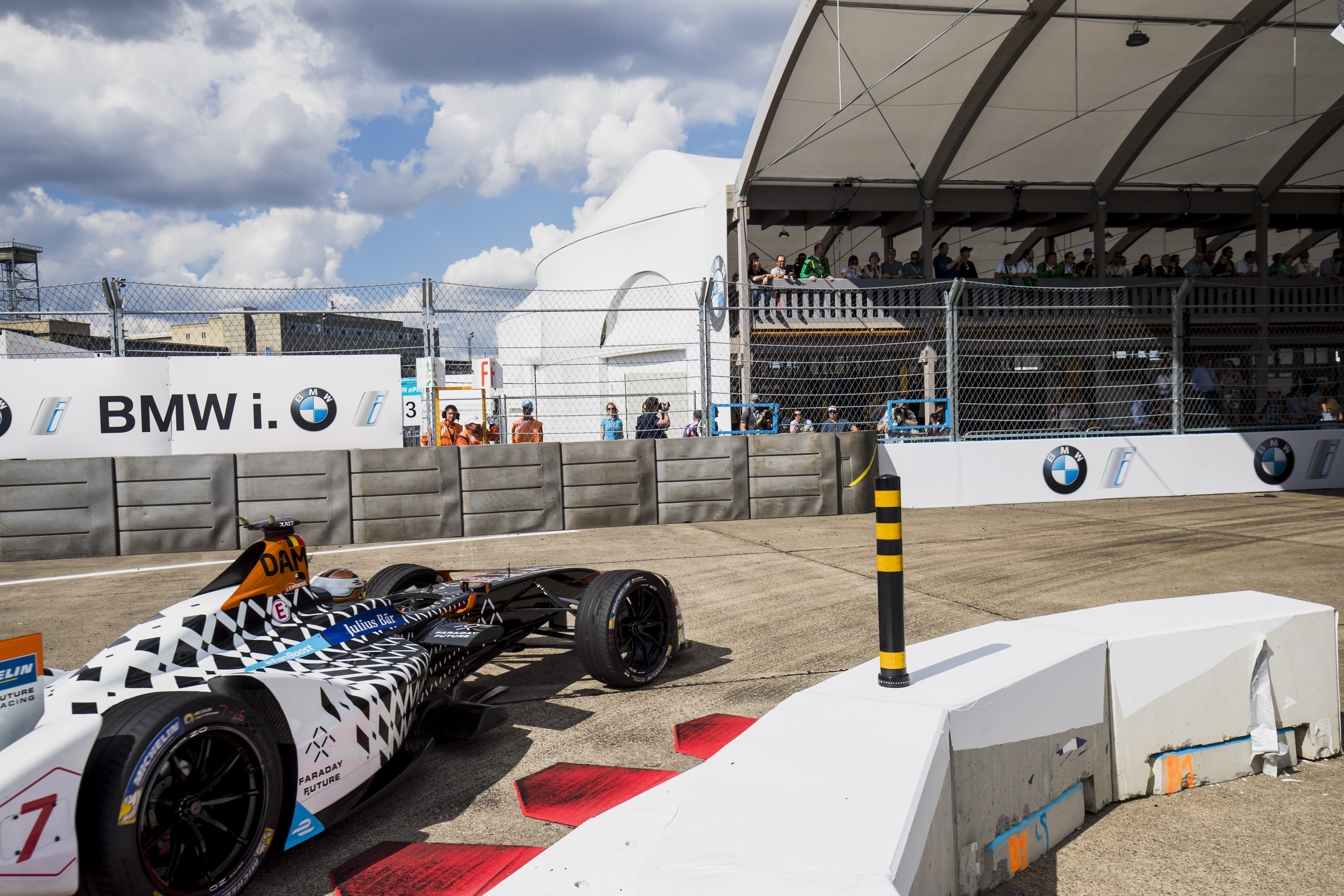 With Di Grassi building a lead over Rosenqvist, and the battle for third between Heidfeld and Lopez remaining firmly on, Sebastien Buemi began to make his way through the pack, the championship leader running in eleventh place after ten laps. Tom Dillmann meanwhile, running in sixteenth in his second race for Venturi, was struck with a drive-through penalty for engine overuse. All eyes were on Buemi’s damage limitation drive, as the Swiss driver methodically carved through the field, passing the NextEV Nio of Turvey to take a points position, and eventually making a clean pass on the inside of turn nine, to take ninth from the Venturi of Maro Engel. At the front of the pack, Di Grassi held a 1.6 second lead, with Rosenqvist, Heidfeld, Lopez, and Bird, nose-to-tail behind him. As the pit window approached, Rosenqvist loomed ever-closer in Di Grassi’s mirrors, forcing a rare lock-up from the Brazilian, the time between them now down to a mere 0.3 seconds.

With Rosenqvist forcing Di Grassi on the defensive, the Swede executed a supremely-confident pass in turn one, to take the lead of the race. One more lap saw the pack dive into the pits, led by race-leader Rosenqvist, and followed by Di Grassi, and Heidfeld. With most of the top ten pitting immediately, the Andretti pair of Frijns and Da Costa, running at the rear, utilised their extra energy to stay out another lap and attempt to jump the rest of the pack. While Rosenqvist re-joined in the lead, followed by Di Grassi and Heidfeld, Daniel Abt and Sam Bird lost places in the pits. Abt emerged in seventh place, losing out to Prost, but the DS Virgin of Bird was the biggest casualty, dropping from fifth to eighth, while teammate Lopez remained in fourth. The top ten emerged as Rosenqvist, Di Grassi, Heidfeld, Lopez, Vergne, Prost, Abt, Bird, Buemi, and Engel. The Andretti pair of Frijns and Da Costa left the pits in eighteenth and nineteenth, their pit strategy having failed to materialise places on track. 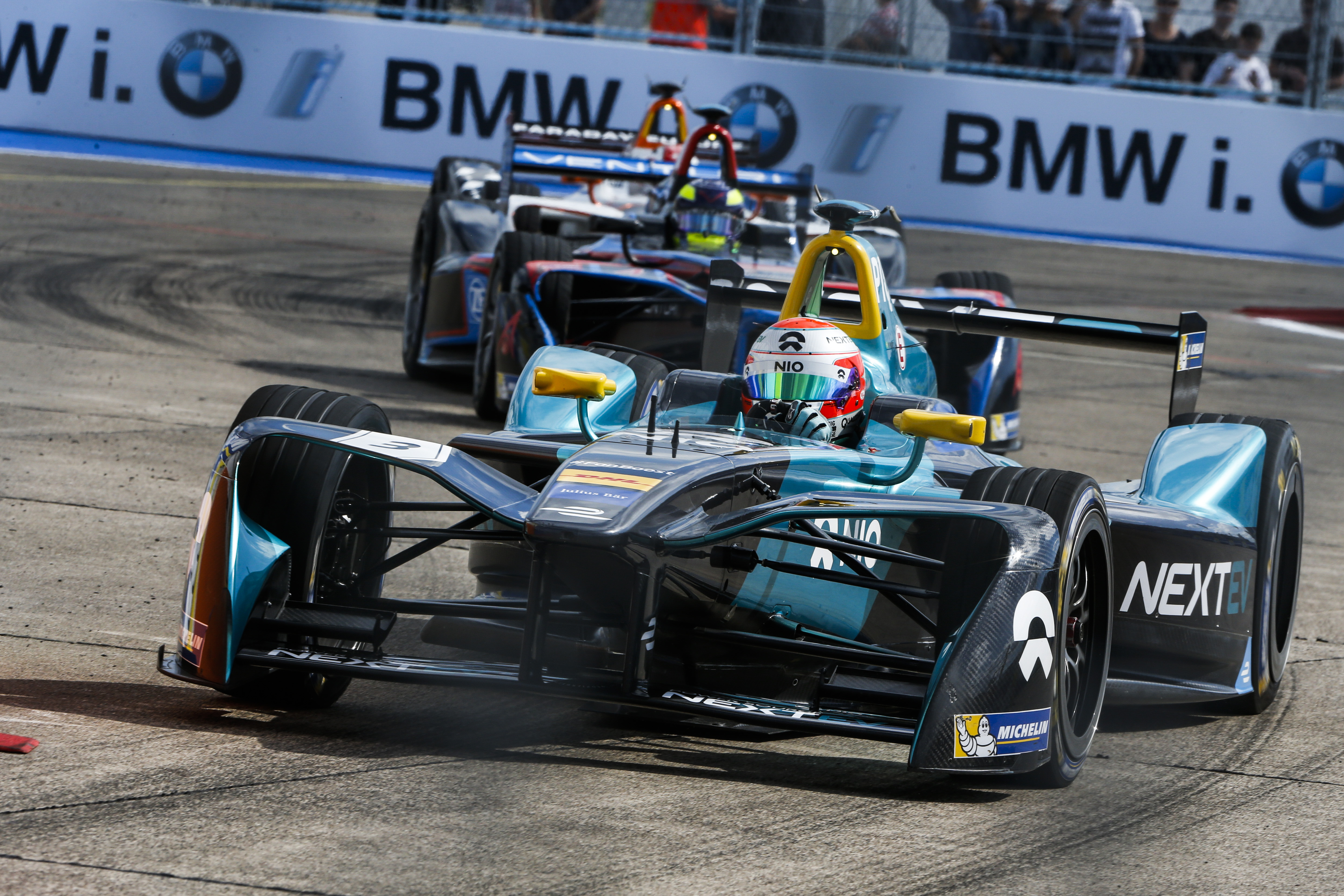 With Di Grassi waiting to utilise his Fanboost on race-leader Rosenqvist, Buemi was still quietly finding his way through the pack, now into eighth place, and chasing down Sam Bird. Vergne, despite having made up places in the pits, was revealed to be under investigation for unsafe release into the path of the Venturi of Dillmann. With fifteen laps remaining, Heidfeld, in third, was starting to close on Di Grassi, but the Brazilian responded to keep the Mahindra firmly behind, and concentrated on chasing down Rosenqvist’s 2.5 second lead. Buemi, meanwhile, was on a charge, motivated by a series of well-executed passes. A late lunge on the inside of turn nine saw him take Bird, before moving past teammate Prost, into sixth place.

In the closing stages, fifth place Vergne was proving the stopper in the bottle, with Buemi, Prost, Bird, and Abt in a concertina behind him. Any chance that Vergne had of a podium was scuppered, as he was issued a five second time penalty for unsafe release in the pits, effectively bumping Buemi up to fifth. As the flag waved, Felix Rosenqvist crossed the line to take his maiden victory in Formula E, with Lucas Di Grassi 3.5 seconds adrift, and Mahindra’s Heidfeld rounding out the podium. The DS Virgin of Lopez crossed the line in fourth, followed by Vergne (with a time penalty to be added, ending his day in ninth), Buemi fifth, Prost sixth, Abt seventh, Bird eighth, and Maro Engel rounding out the points in tenth.

Keep it EV Performance for race two of the Berlin ePrix, with qualifying underway tomorrow at 11am, and the race at 3pm GMT! 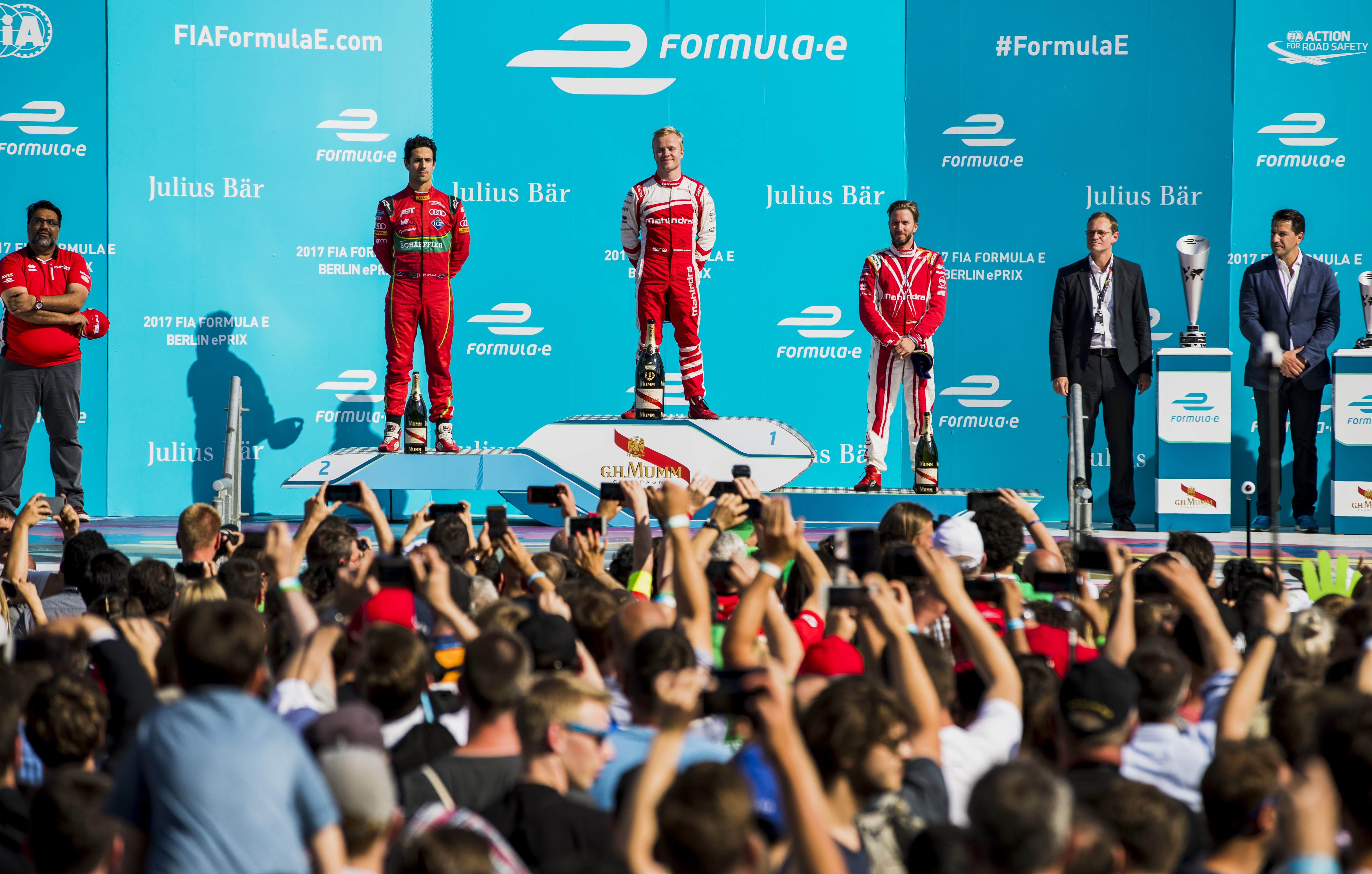