Sebastien Buemi took a commanding victory in today’s Buenos Aires ePrix, his third win in a row, seeing him extend his championship lead over rival Lucas Di Grassi. Jean Eric Vergne finished the race in a confident second, with pole-sitter Di Grassi making up the final step of the podium, after bouncing back from fifth place. The Renault e.Dams of Prost took fourth, with the NextEV of Piquet fifth. The Dragon pair of Duval and D’Ambrosio took sixth and eighth respectively, after a last minute dash from Daniel Abt saw him move up into seventh. Oliver Turvey, and home hero Jose Maria Lopez rounded out the points positions. 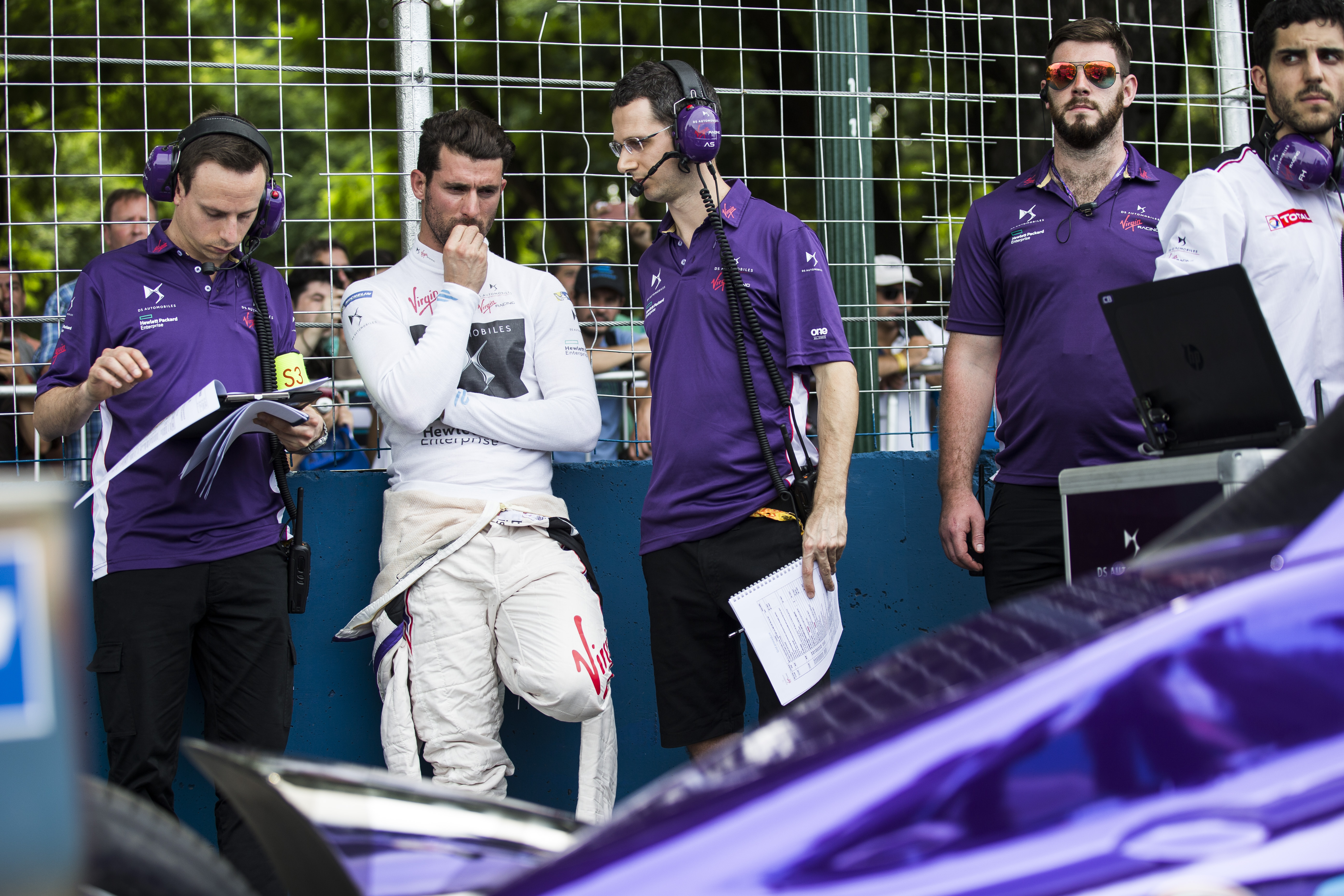 As the lights went green in Argentina, the pack got away cleanly, with pole-sitter Di Grassi retaining the lead. The Mahindra of Rosenqvist proved his pace, darting past Evans and Prost, to hound fifth place Piquet. Disaster struck for the Jaguar of Adam Carroll, failing to get off the line, and putting the pack under Full Course Yellows. Carroll managed to restart as the pack approached to lap him, leaving the Brit ordered to catch up, but respect the speed limits of the yellow flag. As the race restarted, the sister Jaguar of rookie Mitch Evans avoided his team-mate’s bad luck, confidently passing D’Ambrosio into eighth. With the front of the pack nose-to-tail, second place Vergne executed a textbook pass on leader Di Grassi, leaving Buemi on the Brazilian’s rear wing, to pass him moments later. Vergne set the fastest lap immediately, an attempt to get some distance between himself and the speedy Renault e.Dams, with Di Grassi left rueing a slip from first to third in the space of one lap. 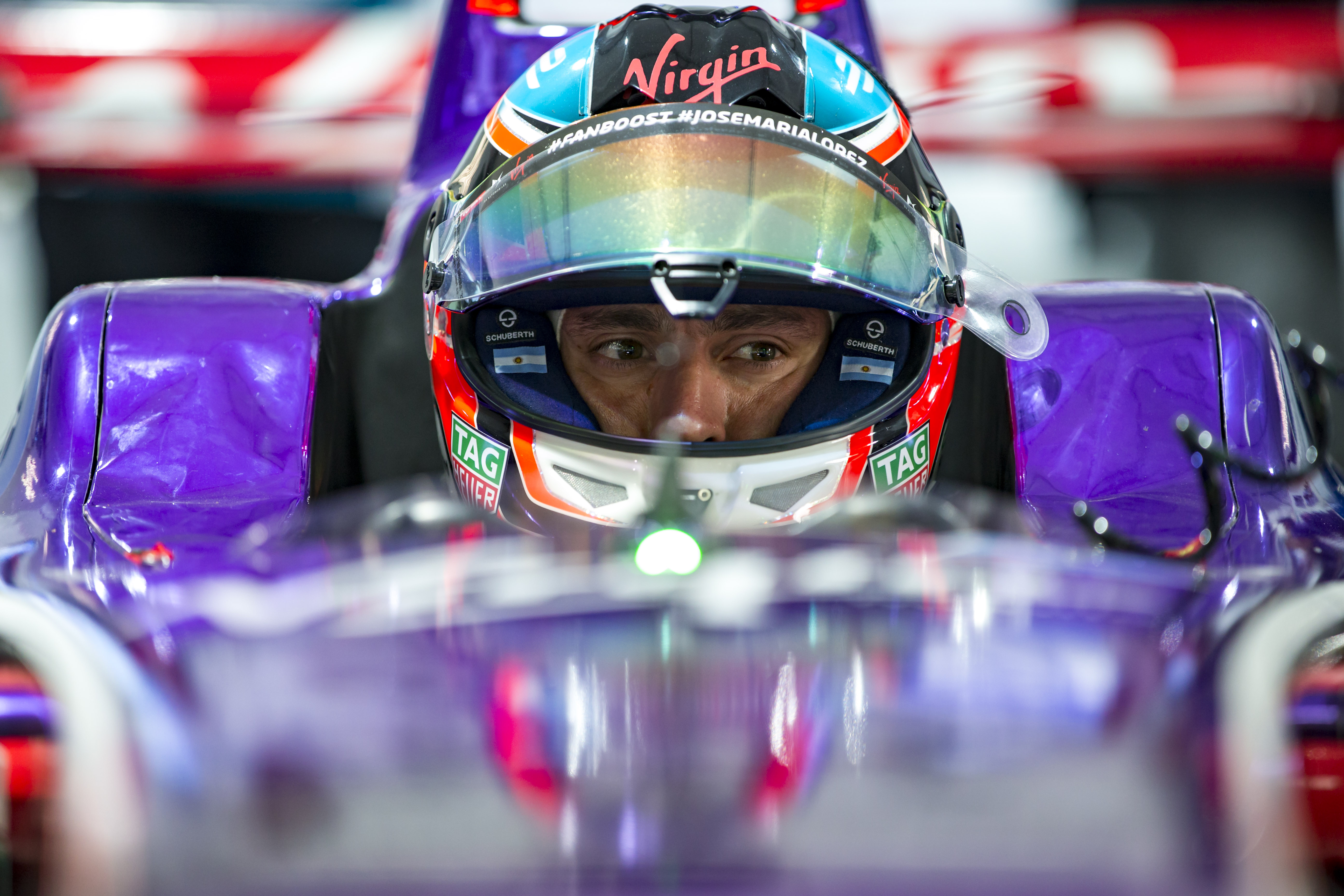 DS Virgin’s luck continued to falter, as Sam Bird dropped down the order to last, after sustaining damage on the restart. Sebastien Buemi meanwhile, began biding his time for a pass on race-leader Vergne. Prost was not to be outdone by his team-mate, taking fifth from an off-line and uncomfortable Piquet, leaving the NextEV in the clutches of a hungry Rosenqvist. In lap six, second-place Buemi executed the all-important pass on Vergne, with a textbook late-braking overtake at T1, sliding into the race lead. Third place Di Grassi continued to struggle with handling, and was passed by Oliver Turvey, leaving Renault e.Dams of Prost on his tail. Rubbing salt into the wound, Buemi began to pull out a lead, setting a fastest lap, 1.2 seconds clear of Vergne.

Sam Bird’s day continued to worsen, as his DS Virgin was forced to box with damage; the Brit entered the second car with the intention of at least gaining fastest lap points, with a race finish impossible. It was not to be Venturi’s day, either, as the troubles continued for the Monegasque outfit; Maro Engel stopped and restarted on track, seeing him down in eighteenth place. Despite a valiant attempt, Engel was given the black and orange flag a few laps later, ending his race. Prost’s patience paid off, meanwhile, as Di Grassi’s struggles saw the Renault cleanly pass him on the inside of T4, leaving the Brazilian down in fifth. 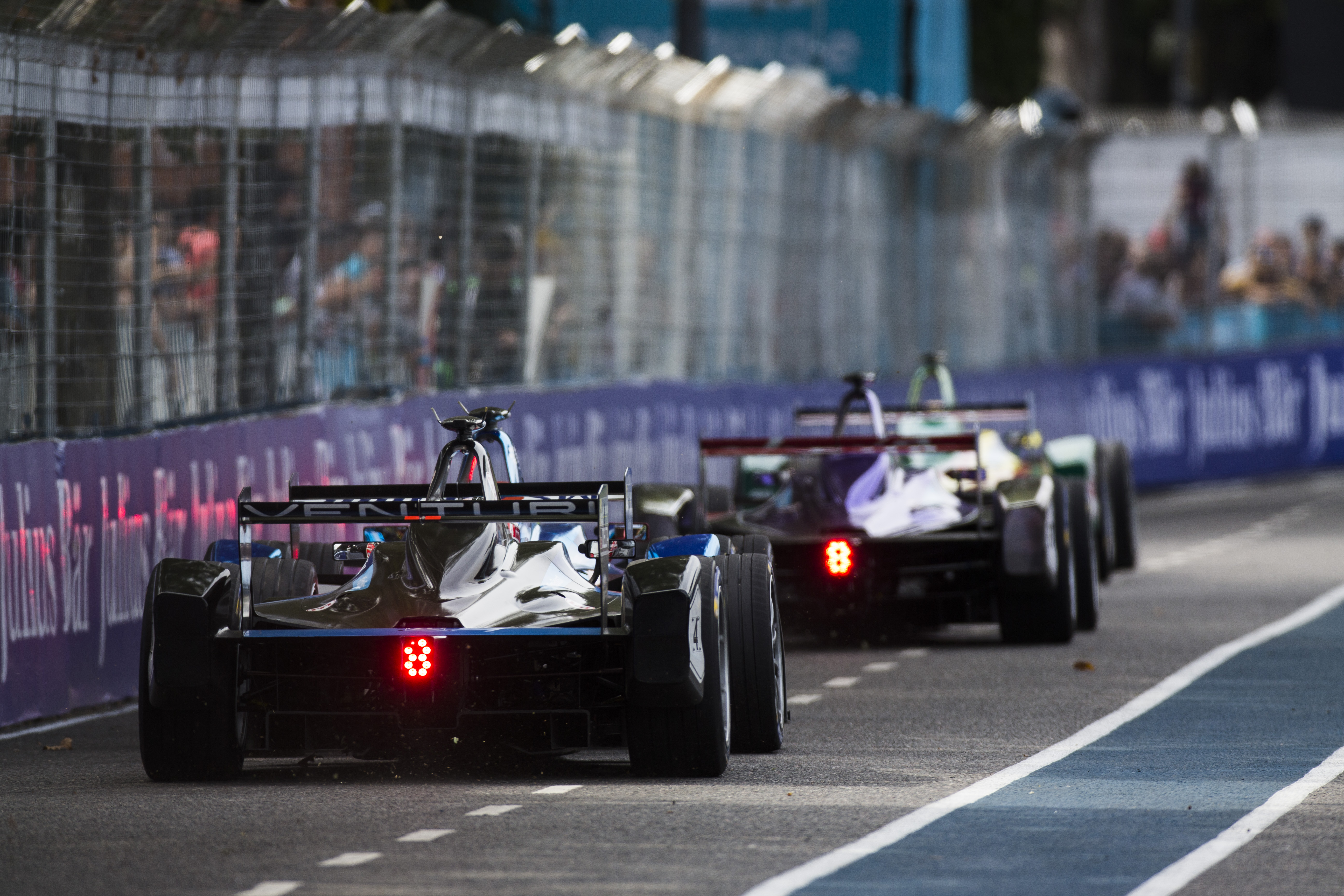 As the pit window approached, Buemi was cruising with a 4.5 second lead from Vergne. Turvey, Prost, and Di Grassi, tussled for the final podium place, but none managed to gain a position, with Di Grassi cutting a frustrated figure. Jose Maria Lopez, meanwhile, was entertaining the crowds into a cheering frenzy with a series of overtakes, and closing in on Daniel Abt in thirteenth. Low on energy, Turvey pitted first, followed by the Jaguar of Evans who – after keeping position at the cost of energy management – was given a 5 second time penalty for speeding under full course yellows. As the pack pitted, the Mahindra pair stayed out, with Rosenqvist taking the race lead from Heidfeld. As the cars filtered back onto track, Di Grassi was initially investigated for an unsafe release in the path of Piquet, not endearing himself to his fellow Brazilian, who gestured angrily at the ABT driver. While the Mahindra pair finally pitted, Buemi emerged to retain his lead, followed by Vergne, Prost, Di Grassi, and Piquet, with Turvey losing places in the pits. Evans, Duval, D’Ambrosio, and Abt rounded out the points positions. The black cat, meanwhile, struck at Mahindra, as Rosenqvist’s second car refused to start, the Swede eventually leaving the pits down in seventeenth place. 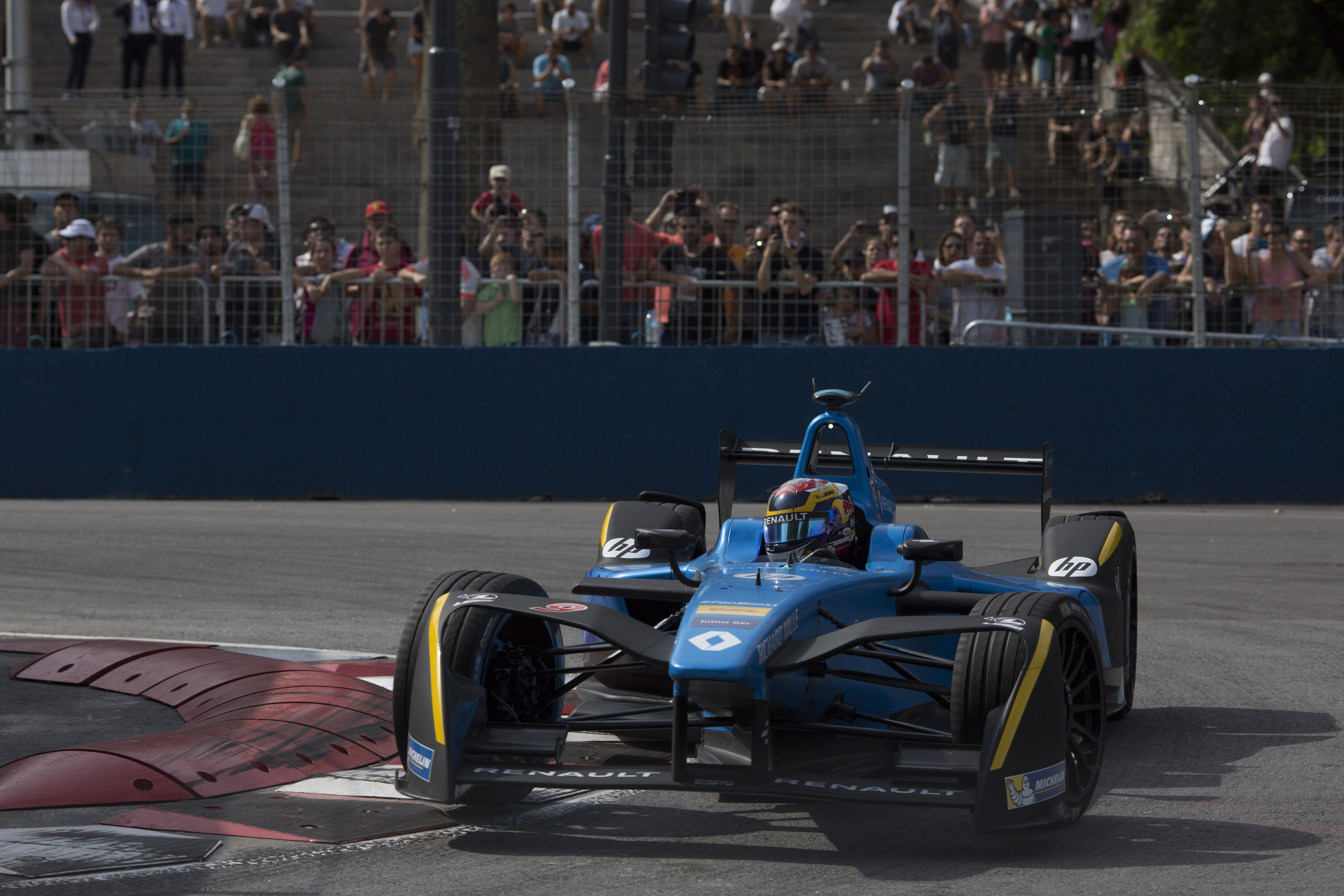 With Buemi still in full control, Di Grassi appeared renewed in his second car, immediately passing Prost in a late-braking overtake into T1, and seeing the Brazilian into the final podium spot. Not to be outdone, the midfield saw a spurt of action after the pit window. Da Costa cut a determined figure after his crash in FP2, hounding home favourite Lopez for fourteenth, with Andretti team-mate Frijns bothering Daniel Abt for the final points place. The Mahindra of Heidfeld, ostensibly sensing a penalty – the German was under investigation for not meeting the minimum pit stop time – began to charge, confidently passing Sarrazin and Frijns into eleventh. The Dragon pair of Duval and D’Ambrosio, engaged in a multi-lap battle, seeing D’Ambrosio win out into seventh. Perhaps spurred on by the reception of his home crowd, Lopez was a man who appeared to be racing for the win, aggressively out-braking Sarrazin to overtake him, with Sarrazin fighting back but failing to regain thirteenth. Heidfeld’s overtakes were soon to be undone, the German taking his 5 second time penalty, and dropping to fifteenth. 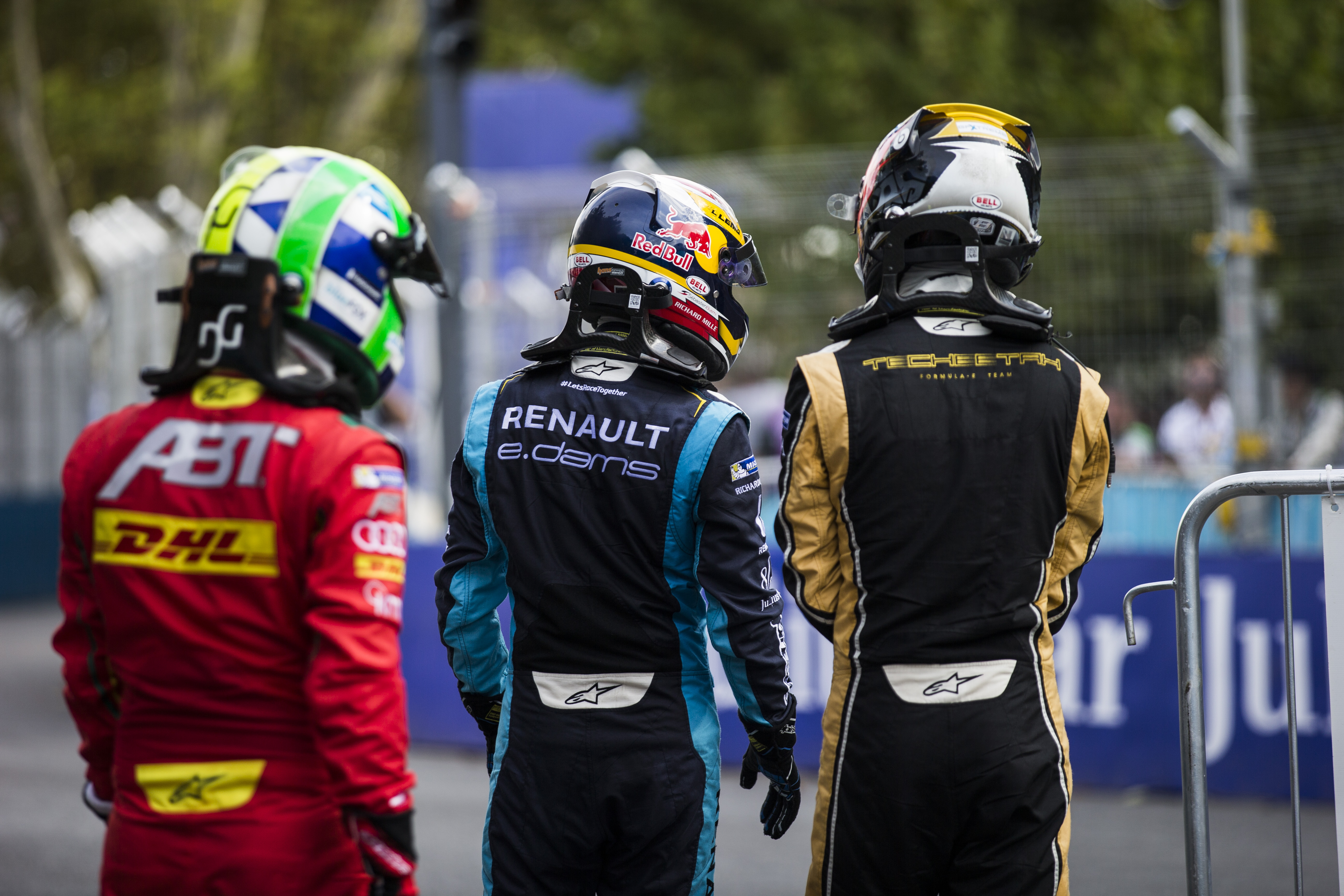 In the closing stages, race leader Buemi smartly used his Fanboost, adding to his three second lead over Vergne, victory appearing certain for the Renault e.Dams team. A last flurry of overtakes saw home favourite Lopez into the final points position, much to the delight of the crowd. Daniel Abt made up for a poor qualifying, steadily plugging away, and passing Oliver Turvey into eighth. As the race approached the checkered flag, the drama of the day held until the dying moments, as Sam Bird was forced wide by the Dragon of Jerome D’Ambrosio, ending the Brit’s race in the wall. As the cars approached the line, a determined Abt used all his remaining energy to dash up into seventh. At the front of the pack, meanwhile, Sebastien Buemi calmly cruised to victory, the first ever driver to score a hat-trick of wins in Formula E.

Formula E now has a six week gap before the series returns on April 1st, in Mexico City.