Back with a bang | Formula E Hong Kong ePrix

Three months on from London, and his first FIA Formula E championship title, Sebastien Buemi took a convincing victory in the first HKT Hong Kong ePrix, with a strategy-smart race that saw Lucas Di Grassi make up a remarkable 17 places to take second, and Nick Heidfeld in the final podium position. Pole-sitter Nelson Piquet was an unlucky casualty of a tangle between the barrier and the DS Virgin of Jose Maria Lopez, and finished the race outside of the points in eleventh.

As the lights turned green, front row starters Piquet and Turvey made a clean getaway, leading down the long straight into the turn one hairpin. Most made it through the first corner unscathed, however, the DS Virgin pair of Lopez and Bird made minor contact, seeing Bird take P3 from his new team-mate, and Buemi opportunistically taking P4, as Lopez began to drop down the order. At turn two, a chain reaction of accidents ensued, bringing out a yellow flag. Braking into T2, Daniel Abt was clipped by an Andretti, leading to heavy braking from Ma Qing Hua, who struck the rear of the pack, losing his front pod and ending in the wall. Di Grassi simply couldn’t stop, and ploughed into the rear of the Techeetah, damaging his front wing. Within two laps, both ABT Schaeffler Audi Sport drivers were shown the ‘meatball’ flag, and had to pit to repair the damage, while Ma changed to his second car, running out of energy being a certainty before the end of the race.

Turvey, in second, began to fall back into the clutches of Bird and Buemi, and by lap 7, both had passed the NextEV, a particularly nice pass up the inside of T1 from Buemi, leaving the Brit in fourth. With leader Piquet sailing off into the distance, Lopez’ luck worsened as he dropped down the order, down to P18 by lap nine. The Techeetah of Jean-Eric Vergne also saw the black cat strike, as he began to lose positions without explanation, forcing him to change cars with two-thirds race distance to run, making a double-retirement likely for the new Techeetah team. A small error into turn five saw Felix Rosenqvist lose the rear of his Mahindra, and damage his rear wing in contact with the barrier, leaving the rookie to swap to his second car, with 30 laps remaining.

Lap 18 saw a race-changing moment for leader Piquet, as the DS Virgin of Lopez came a familiar casualty of the newly-altered chicane, and shunted into the barriers. Piquet simply didn’t have time to react as the DS Virgin came into view, and took avoiding action that saw him hit the TecPro. While the NextEV wasn’t damaged, the race lead was lost, and the Brazilian rejoined in third. The safety car was deployed while the stricken DS Virgin was cleared, seeing Bird leading, from Buemi, Piquet, Turvey, Heidfeld, Duval, Da Costa, Prost, and Engel, with the Jaguar of Mitch Evans in the final points position, his team-mate Adam Carroll just behind. As the pit window neared, strategies came into play. Under the safety car, Buemi, Turvey, and Prost all pitted. Piquet stayed out.

As the safety car came in, Piquet pitted, leaving Bird in the lead. Down to 4% energy, the Brit risked another lap, a strategy mirrored by both Jaguars, with Evans and Carroll in P2 and P3, on 4% and 2% remaining energy. A risky strategy appeared as though it would pay off for the DS Virgin, as Bird pitted with just enough usable energy to avoid a penalty. However, technical gremlins saw him unable to start his second car, and time bled away in the pits, leaving a frustrated Bird to return to the track a lap down. Early pitting under the safety car from Buemi had paid off. With the e.Dams driver in P9, the rest of the pack pitted, and Buemi found himself leading the race, with a resurgent Di Grassi in second, from Heidfeld, Prost, Turvey, with former race-leader Piquet down in ninth.

With several laps remaining, Di Grassi was nearing to within two seconds of the race leader, but couldn’t seem to close the gap. Within the top ten, a juicier battle was taking place, as Robin Frijns, the last of the pack to pit, was making use of his extra energy to carve his way up the rankings. A neat T1 pass on Piquet saw Frijns make up 12 places in total, having started at the back of the grid. As the race entered the closing stages, those with extra usable energy began to mount a charge. With 5 laps remaining, fifth-place Turvey, D’Ambrosio and Da Costa were nose to tail. Da Costa bided his time, and – like his team-mate, with energy to spare – passed both cars, leaving the Andretti on a charge. Not to be outdone, Frijns began to harrass Oliver Turvey, and with two laps remaining, made a clean pass, leaving the Andretti pair in fifth and sixth, thanks to smart strategy and skillful energy management. 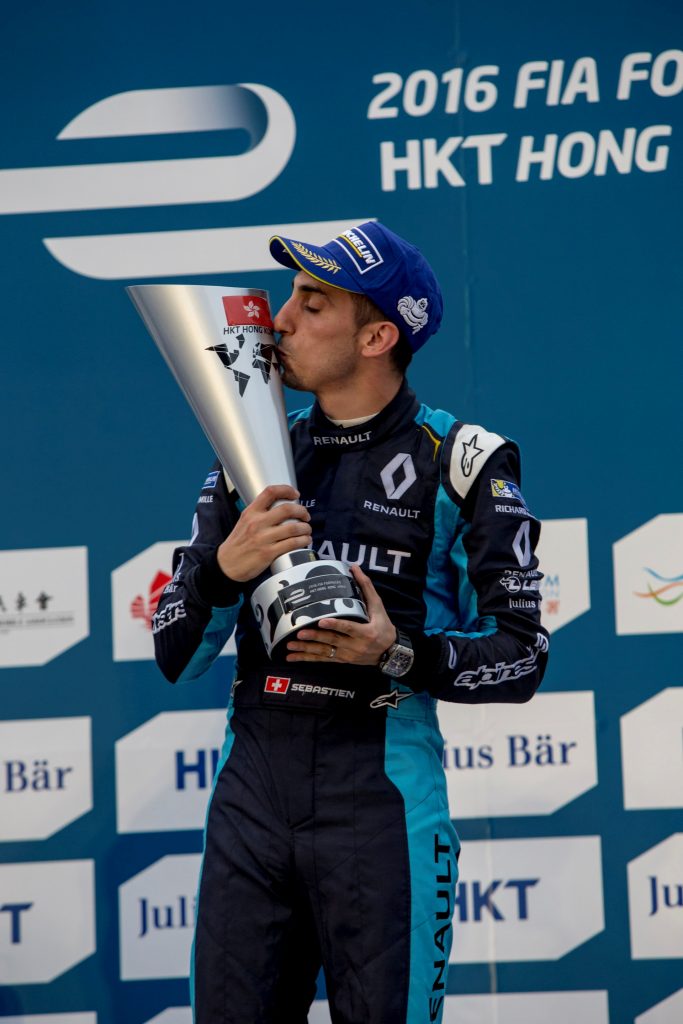 Entering the final lap, energy management remained the focus, as Heidfeld and Prost began to waver dangerously on 3%, with questions whether the pair could make it to the line, and certainly ruling out any last minute overtaking. Their luck held, however, and Buemi crossed the line to victory, from Di Grassi – a remarkable podium finish having started at the back of the pack – and the Mahindra of Heidfeld in third. Prost just missed out on a third consecutive podium, and the MS Amlin Andretti Pair of Da Costa and Frijns had a successful day in P5 and P6, with D’Ambrosio, Turvey, Engel, and Sarrazin making up the points scorers. Piquet finished just outside the points, followed by Carroll, Bird, Duval, and Rosenqvist, with the rest retiring from the race.

After a frenetic season opener, round two of the FIA Formula E Championship sees the first African race of the series in the streets of Marrakech, on November 12th.

Keep it here at EV Performance for the latest news and race results!

Vote for your team of the race & win!