Sebastian Buemi took his second victory in a row in the FIA Formula E championship today, as the all-electric series took to the African continent for the first time, on the streets of Marrakesh. The Moulay El Hassan circuit saw Buemi execute flawless pace and energy management to charge through the field, beating the DS Virgin of Sam Bird. Pole-sitter Felix Rosenqvist rounded out the podium in third, despite leading for most of the race, showing incredible maturity in only his second Formula E outing. Sebastian Buemi now leads the championship on 50 points, from Di Grassi on 28, with the Brazilian recovering from a poor qualifying in twelfth, to finish in fifth.

A pre-race penalty saw pole-sitter Rosenqvist joined on the front row by Sam Bird, with Buemi dropping from second, after a 5 place grid-drop for an underweight fire-extinguisher. As the lights went green in the Red City, the pack got a clean getaway, with pole-sitter Rosenqvist benefiting from a strong start and maintaining the lead, from Bird, Piquet, and Vergne. Despite running three wide, the pack completed an incident-free first lap, and an off-pace Heidfeld began to cleave the pack into two halves, with a frustrated Di Grassi stuck behind him in twelfth.

Rosenqvist’s undeniable skill in street circuits saw him pull out a confident two second gap on Bird, while a determined Buemi began his charge, moving down the inside of Prost to make up a place immediately. Di Grassi finally managed to break through traffic, taking eleventh as Heidfeld drifted wide, and the Brazilian immediately hounded the Andretti pair ahead, soon passing Frijns to take tenth. Buemi responded in kind, selling Abt a dummy on the approach to Turn 10, sailing into fifth, and setting a fastest lap in the process. At the podium end of the pack, Vergne began to line up third position Piquet. Using the slipstream on the long straight, Vergne was aided by a lock-up from Piquet, and passed cleanly at Turn 1, setting off immediately after second place Sam Bird. 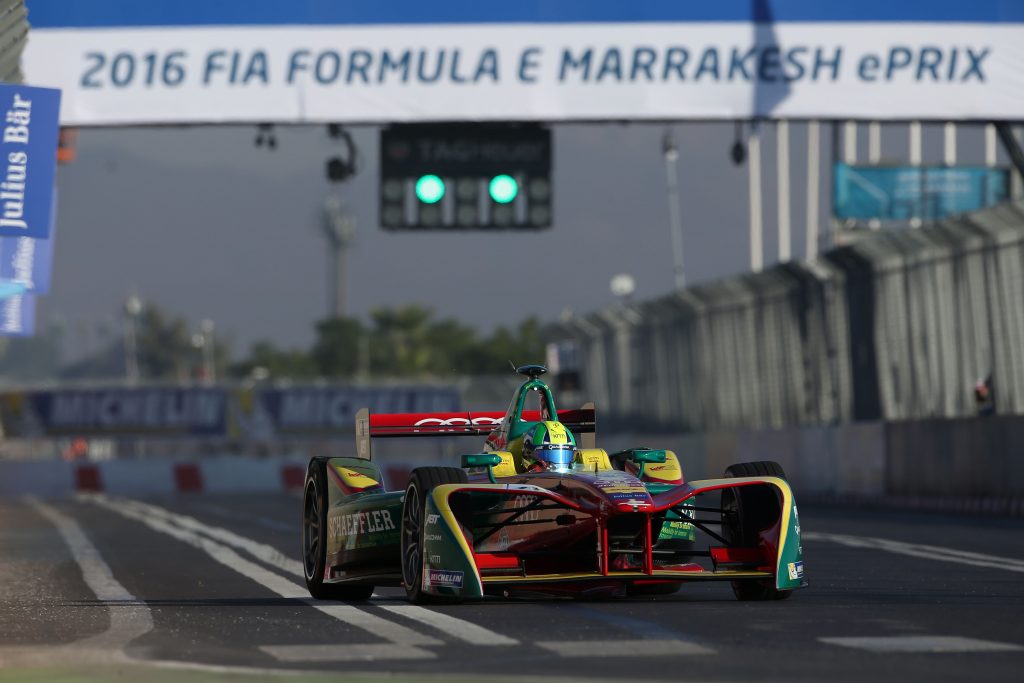 A full course yellow threatened to eradicate Rosenqvist’s four second lead, as the Andretti of Da Costa stopped on track and brought out a yellow flag, giving Di Grassi another place and seeing him up into ninth. After a full reset, Da Costa managed to restart the stricken car, but had dropped to the back of the pack, and retired later in the race. Buemi soon found himself on Piquet’s tail, and with 5% more usable energy and a simply faster car, dived up the inside into fourth, to close in on the podium places. Bird soon began to feel the breath of Vergne in third, who was catching the DS Virgin at over four tenths a lap, and easily took second position, with a pass on Bird through Turn 1.

Energy management soon came into play for Buemi, biding his time in fourth. With more power available, the Renault was catching Vergne and Bird as the pit window approached. Pushing hard saw race leader Rosenqvist down to 1% energy, with Vergne close behind. Both drivers pitted, with third and fourth place Bird and Buemi staying out an extra lap. Wringing the last available pace out of the e.Dams, Buemi hunted down Bird, passing him at Turn 11. Rosenqvist and Vergne emerged from the pits in thirteenth and fourteenth, but with the rest of the pack still to pit, were effectively race leaders. Leaving the pits, Buemi had made third place stick, ahead of Bird, Prost, and Abt, with Di Grassi up into seventh. Electrical issues in the pits for Nelson Piquet put paid to his hopes of points, and the NextEV emerged way down in eighteenth place. Maro Engel was a casualty of technical gremlins too, parked in the garage after pitting, and out of the race.

As Di Grassi passed his team-mate into sixth, further drama struck for Techeetah, as second place Vergne was issued a drive-through penalty for speeding in the pit lane, moving Buemi and Bird onto the podium. Taking the penalty saw Vergne emerge in fifth, ahead of the ABT pair, and behind Prost. Dragon Racing shared in the suffering, after earlier contact between the pair had left Duval with only half a wing, and Lap 24 saw Duval drop down the order and remain stationary on track. He was able to restart, but later retired with three laps remaining.

As the race entered the final laps, Buemi’s charge continued unabated. With the gap to Rosenqvist now at 1.1 seconds, the chase was on. With a quicker car, FanBoost, and more energy remaining, Buemi knew it was simply about patience and time, lining up Rosenqvist at Turn 11, and taking an easy lead. Di Grassi continued his recovery drive, throwing his car up the inside of Turn 3, to pass his team-mate, and seeing him up into sixth. After a relatively anonymous race, despite being the only driver to have driven the Marrakesh track before, Jose Maria Lopez managed to jump the Andretti of Frijns into tenth, and take the final points position.

Vergne’s day only worsened, as Di Grassi began to line him up for what looked like an inevitable pass. To his credit, Vergne refused to make it easy for the Brazilian, but with Di Grassi on more usable energy, Vergne was a sitting duck, and was easily passed at Turn 7, seeing Di Grassi up into fifth. Rosenqvist in second was now being hounded by third place Sam Bird, and the Brit used the slipstream of the Mahindra to lunge past him on the brakes, and began to chase down Buemi, 2.9 seconds ahead. Struggling with energy management, and with Prost 7 seconds down the road in fourth, Rosenqvist began to ease off, to ensure finishing the race with energy remaining.

As the pack entered the final lap, the black cat struck for Jaguar, as Mitch Evans locked up and ran wide, tapping the wall and ending his race. But it was to be Buemi’s day, as he crossed the line to a stunning victory, with Bird in second, Rosenqvist deservedly taking the final podium place, Prost in fourth, Di Grassi recovering to fifth, and Abt, Turvey, Vergne, Heidfeld, and Lopez making up the points. The Andretti of Frijns finished just outside the points, ahead of Sarrazin, D’Ambrosio, Carroll, Ma Qing Hua, and Piquet Jr, with Evans, Duval, Engel, and Da Costa not finishing the race. 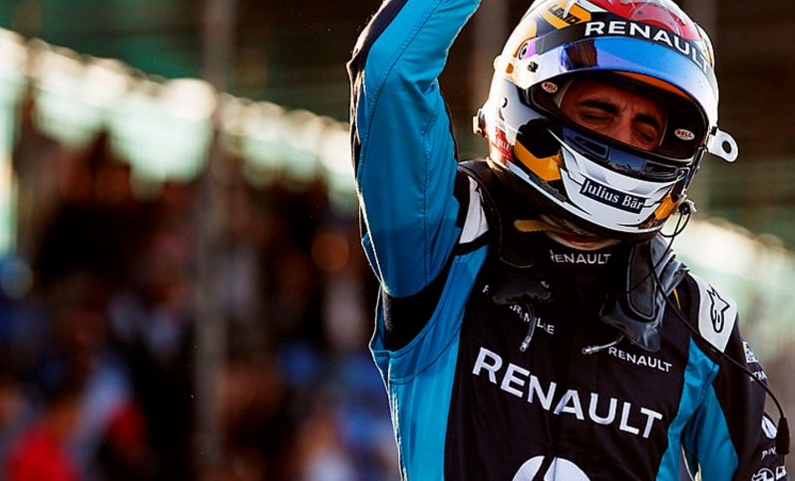 Formula E now sees a significant 98 day gap in the calendar, until the championship recommences in 2017. The series returns to Buenos Aires, Argentina, on February 18th.

Keep it here at EV Performance, for the latest Formula E news during the break!