But did you know that brunette bombshell actress Alexandra Paul was already heavily into EVs by the time Baywatch began filming? Now actively promoting the electric car movement, with a couple of rare beasts in her garage, we got the low-down on how and why it all began…

EV Performance: Thanks for taking some time out to talk to us. We were huge fans of Baywatch and were delighted to hear you’re such a big part of the EV movement in America.

Could we start by discussing you car history? Has it always been about low-emission vehicles for you or have you owned more menacing cars in the past?

Alexandra Paul: I have always bought cars with efficiency in mind. I had a diesel VW in the early Eighties, thinking it was less polluting, but then I decided that was a mistake because even though it got more miles per gallon, there were many more particulates…

EV: When and why did you purchase your first EV?

I bought my first EV in 1989, after the Exxon Valdez oil tanker spilled thousands of gallons of oil into pristine Alaskan waters. At first, I was very angry at Exxon, but then I realised that oil tanker was out there to fill up my car. So I decided to walk my talk instead of complain.

I called up the actor and my eco-mentor Ed Begley Jr and asked him where to get an electric car. He directed me to a company in Santa Rosa, CA that was taking out the gas tanks from old cars and replacing them with lead acid batteries.

My first EV was a Datsun whose batteries I had to add water to every week or so. It went 25 miles on a charge. I ran out of juice the first time I drove it because I did not understand the concept of a light foot! Luckily, with lead acid batteries you can wait for 15 minutes and the batteries will recharge a bit and you can go another half-mile, so I eventually got home!

In 1993, I bought a converted VW Golf that went 50 miles per charge. Its battery pack literally fell out onto the street, but I was in line for the General Motors EV1 by then and got it the first day it was available to the public in December of 1996. Hunter Green, Car #37. I fell in love with that car. It went over 120 miles per charge and performed like a dream. 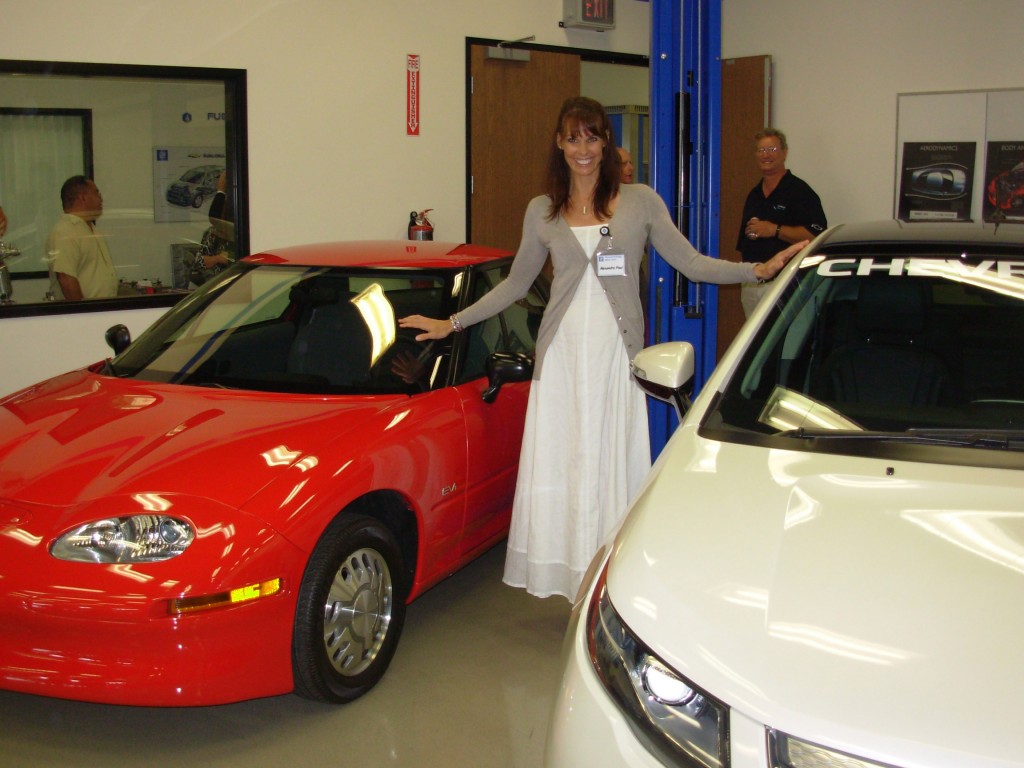 EV: Can you explain to us exactly what the Plug In America group is, and what it is you do as part of it?

AP: I am a founding member of Plug In America, which is the largest non-profit advocacy group for electric vehicles in the world.

We were formed after GM, Toyota, Ford, Honda etc all crushed their EVs, when the California regulation mandating that the biggest car manufacturers had to have a certain percentage of zero emission cars on the road was gutted.

We had joined together to protest the crushings, particularly that of Ford’s Think (a protest in northern California) and GM’s EV1 (a month-long vigil in Los Angeles featured in the documentary Who Killed the Electric Car?) 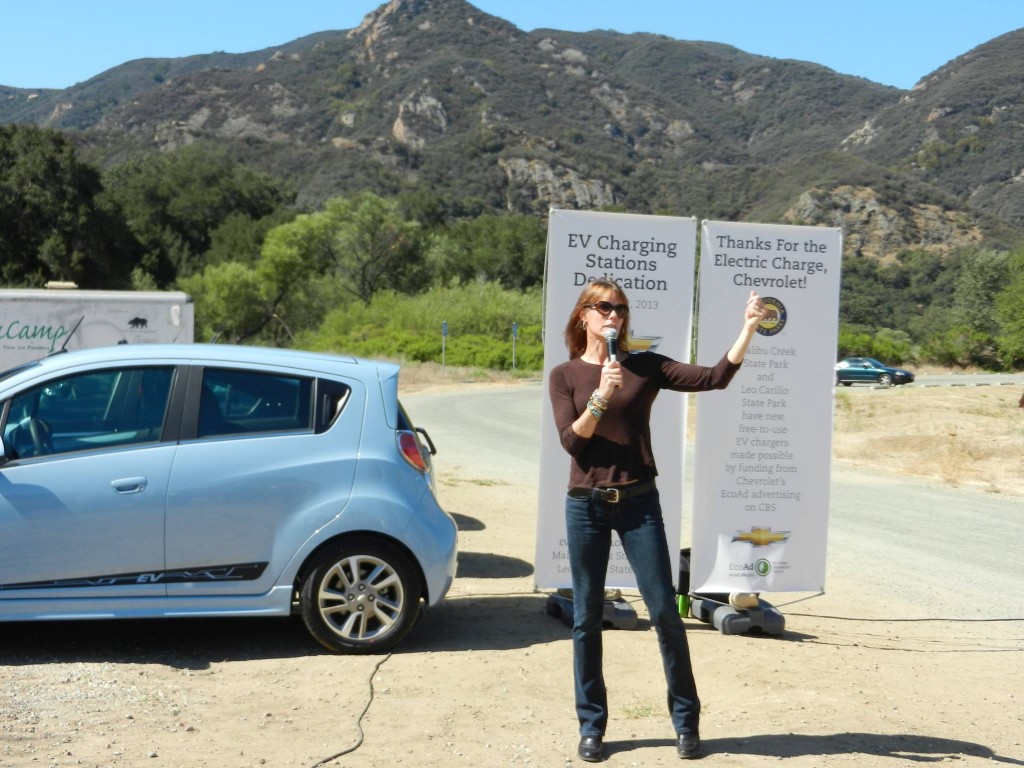 EV: How are you finding your EVs to use at the moment? Are you having any problems with range?

AP: I drive the extended-range 2011 Chevy Volt and I get about 40 miles per charge. My husband drives the all-electric Chevy Spark and he gets 85 miles on a charge. We are both extremely happy with our cars.

EV: What do you think is the future of EVs in the USA?

AP: They are inevitable. There is a reason they call gasoline a ‘fossil fuel’ and the future has to move away from it. It might take a bit longer because gas prices have gone down, but ultimately the gasoline car will go the way of the horse and buggy. 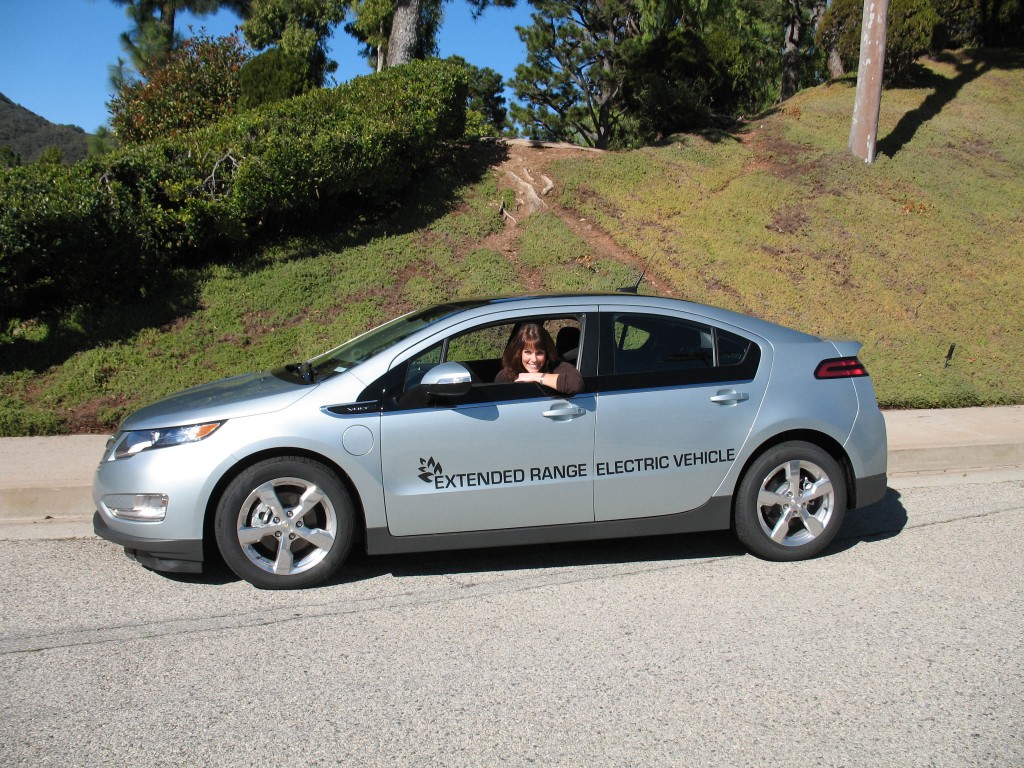 EV: If EVs were more popular in the Baywatch days, which car would you most like to be seen in out on the beach?

AP: I actually drove my EV to the set every day so it was seen at the beach! Hopefully though the lifeguard trucks would be electric nowadays too, though…

EV: Did you ever get the chance to meet KITT, Hoff’s Knight Rider car?

AP: Yep. I was at David Hasselhoff’s house for Jeremy Jackson’s wedding party and it was in the front driveway. My fellow cast mate Jaason Simmons and I sat in it. I’ll take an EV1 any day, though…