In a fascinating race of team orders, smart energy management, and multiple incidents, Sebastian Buemi proved victorious in Berlin, with Daniel Abt second and Lucas Di Grassi in third, after Abt failed to heed an order to allow his teammate through for the sake of the championship.

As the lights went green, Sebastian Buemi took a flyer, catching Jean Eric Vergne sleeping and taking the lead. Lucas Di Grassi got a strong getaway, passing the NextEV pair of Piquet and Turvey to take P6, proving a perfect start for both championship contenders. Vergne, however, cut a determined figure and dived up the inside of turn 1 to retake the lead. Bruno Senna’s day went from bad to worse, after being demoted from P5 to P15 for incorrect tyre pressure, he collided with newcomer Rene Rast and pitted with front wing damage. As the pack settled, the top 6 of Vergne, Buemi, Abt, Bird, Prost, and Di Grassi began to concertina. The black and orange flag proved to be popular over the ensuing laps, as minor front wing damage for Piquet and Turvey, and rear wing damage for Rast – from his earlier collision with Senna – saw all three drivers forced to pit, ruining what had been a good qualifying session for NextEV, and bringing both out at the back of the pack. 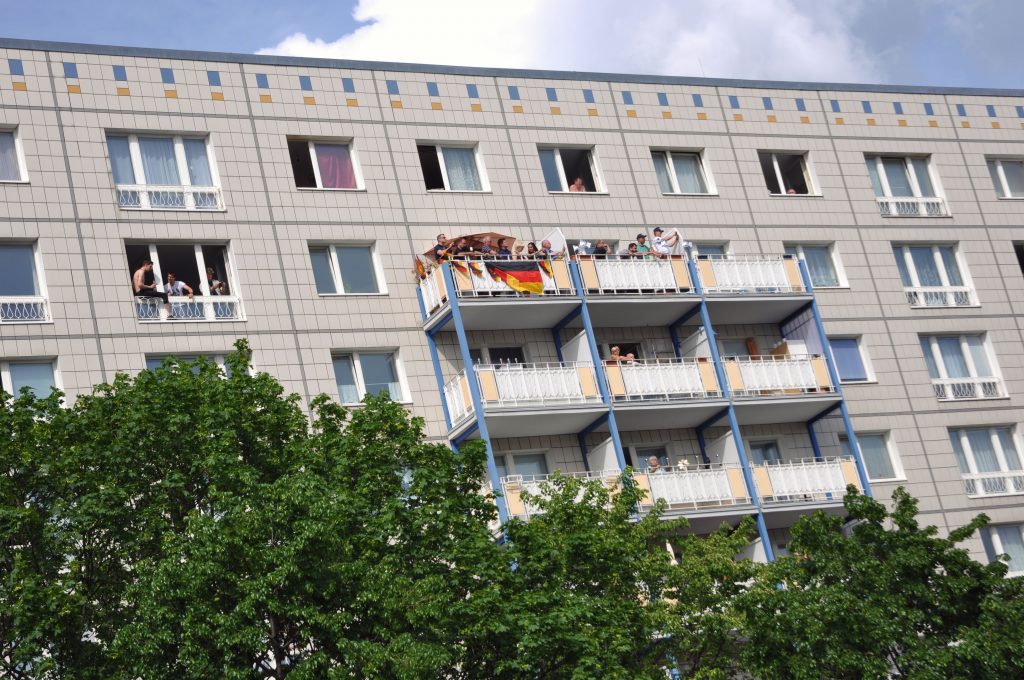 Buemi remained patient, before regaining the race lead in a stunning move into turn 10, completing an inside pass and almost touching Vergne, but mature driving from both keeping the move clean. Vergne immediately found himself under pressure from Daniel Abt in third, with Abt too under pressure from fourth place Bird. Unfortunately for for Brit, taking a kerb too fast had loosened his front wing endplate, causing it to wobble precariously, and his fight was put paid by the black and orange flag, as he was requested to pit. A quick nose change from the DS Virgin team saw him return in P14, but his championship hopes seemed dashed. Buemi, meanwhile, began to pull out a lead, with a fastest lap seven tenths quicker than anyone else on track, proving the e.Dams undeniable pace and Buemi’s determination to make up for the points deficit.

The midfield proved themselves equally hungry, with the penalised Heidfeld carving up the pack into the top 10, seeking to impress in his home race. The German proved aggressive, mounting the kerb to pass Conway, and taking an eventual P7 in a fantastic comeback drive for Mahindra. The Amlin Andretti pair of Frijns and Silvestro also impressed, with Frijns taking an eventual P6 after starting in P16. A particularly smart late braking move from Silvestro, allowed her to pass Duval, showing her desire for results, and she too finished in the penultimate points position. A later lock-up from Duval ended his race in the wall, illustrating how poorly the car was handling in both qualifying and the race, making it a day to forget, with both Dragon cars outside the points. 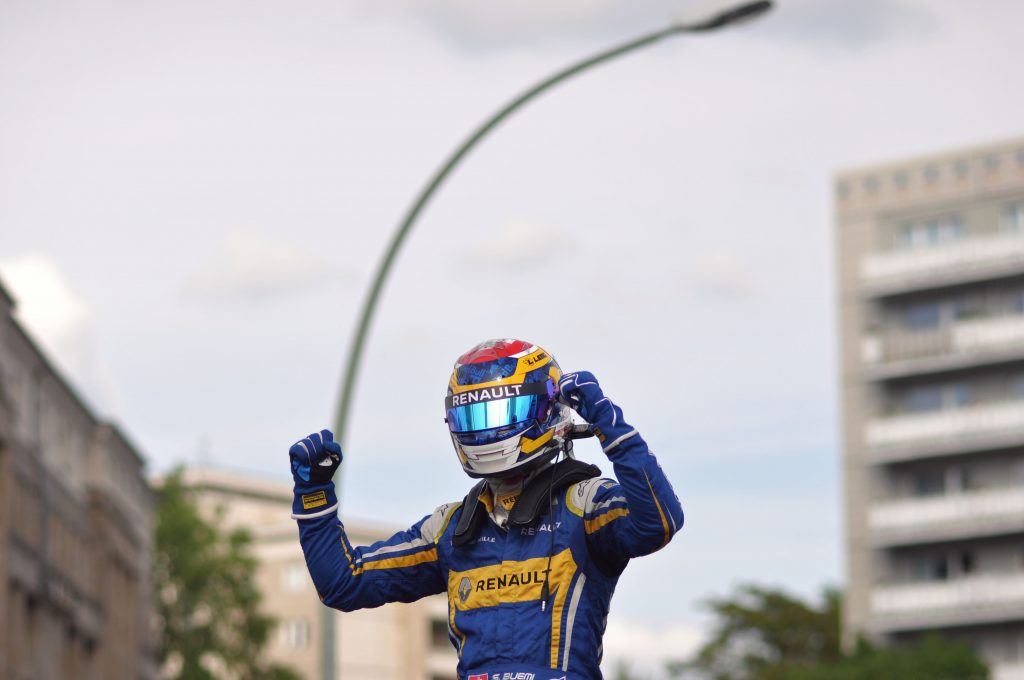 Not to be outdone by the midfield, Daniel Abt made a confident move on Vergne into the hairpin, taking second place. Vergne’s woeful luck continued, while defending from fourth place Prost. Taking the chicane wildly, Vergne shattered his front right wing on the kerb, received the black and orange flag, and lost position. However, due to the three lap rule, this allowed him to wait until the car swap to pit. As the cars began to approach the pit window, it was clear that smart energy management from Di Grassi had left him with the option of another lap to leapfrog the order. After the pack resettled after putting, Buemi retained the lead, with Abt in second and Prost in third, Di Grassi’s gamble paying off as he leapfrogged Vergne into fourth. Buemi’s determination saw him pull away a 10 second gap, but the race was finally placed under full course yellows to clear the debris left by Vergne’s earlier incident, cutting his lead.

As the race went green again, Sam Bird was a determined figure, overtaking Aguri’s Ma into P13 and D’Ambrosio into P12, for a good recovery drive, but the rest of the race was dominated by the fascinating interplay between the Abt and Renault drivers. With more energy available, Di Grassi began to harry Prost for third, who had started to drop back from second place Daniel Abt. Di Grassi’s first attempt saw him sneak around the outside of Prost into turn 1, getting alongside, but proving mature enough to judge the lack of room to make the move stick. Still hounding Prost a lap later, Di Grassi sold the Renault a dummy in the same corner, passing perfectly on the inside and into the final podium position. In lap 42, an excursion into the wall from Duval brought out the safety car, closing the gap Buemi had built, and leaving him vulnerable to the Abt pair behind. 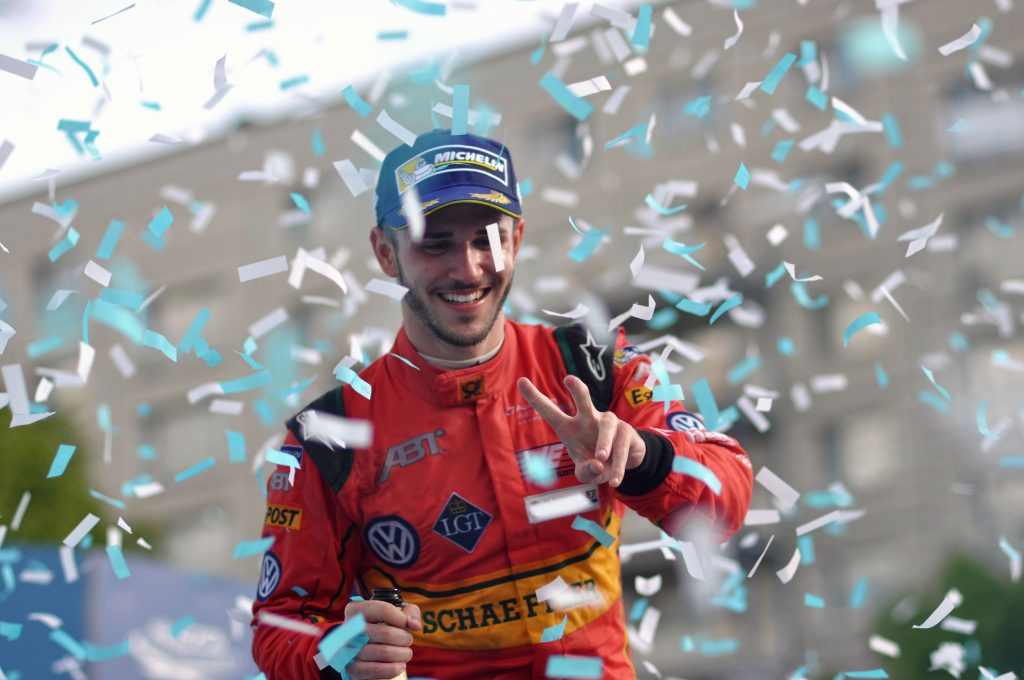 With a handful of laps to go, as the race went green again, it became clear that second place Abt was too far back to make a move on Buemi, but Di Grassi was aiming for damage limitation in the championship, and closing on his teammate. With both driver radios open, Daniel Abt was told that Di Grassi was the faster car, but appeared to make no effort to heed the order. Approaching the final corner, it was clear that Di Grassi could not pass, and finished third behind Buemi and Abt. Nico Prost missed out on a podium after falling away from the pack, with initial pole-sitter Vergne finishing in fifth. A good race for Frijns and Heidfeld saw them in sixth and seventh, with Conway, Silvestro and Sarrazin rounding out the points positions.

With the cancellation of the Moscow ePrix, the season now moves to a double-header in Battersea Park on July 2nd/3rd. As the championship draws to a close, Lucas Di Grassi remains one point ahead of Sebastian Buemi in the championship, the two drivers now the only ones in contention. Join us in London to find out who will prove victorious!