Sebastian Buemi put paid to the ghosts of ‘deflate gate’ – after his disqualification yesterday for tyre infringements – with a victory in the second of Berlin’s double-header ePrix today. With Buemi potentially missing the next double-header in New York, due to WEC commitments, and effectively handing 58 points to his nearest rivals, the victory gives Renault e.Dams a small cushion in his absence. Though first to the checkered flag, Felix Rosenqvist held a ten second penalty for unsafe release in the pits, gifting Buemi the win. Lucas Di Grassi rounded out the podium in third.

As the lights went green, Rosenqvist got a quick getaway, to keep Buemi in check behind. The DS Virgin pair of Lopez and Bird ran wheel-to-wheel into turn one, but Lopez remained ahead in third. As the cars ran three-wide, a concertina saw contact between Engel and Duval, and Engel pitted with damage to his Venturi, rejoining several laps down. 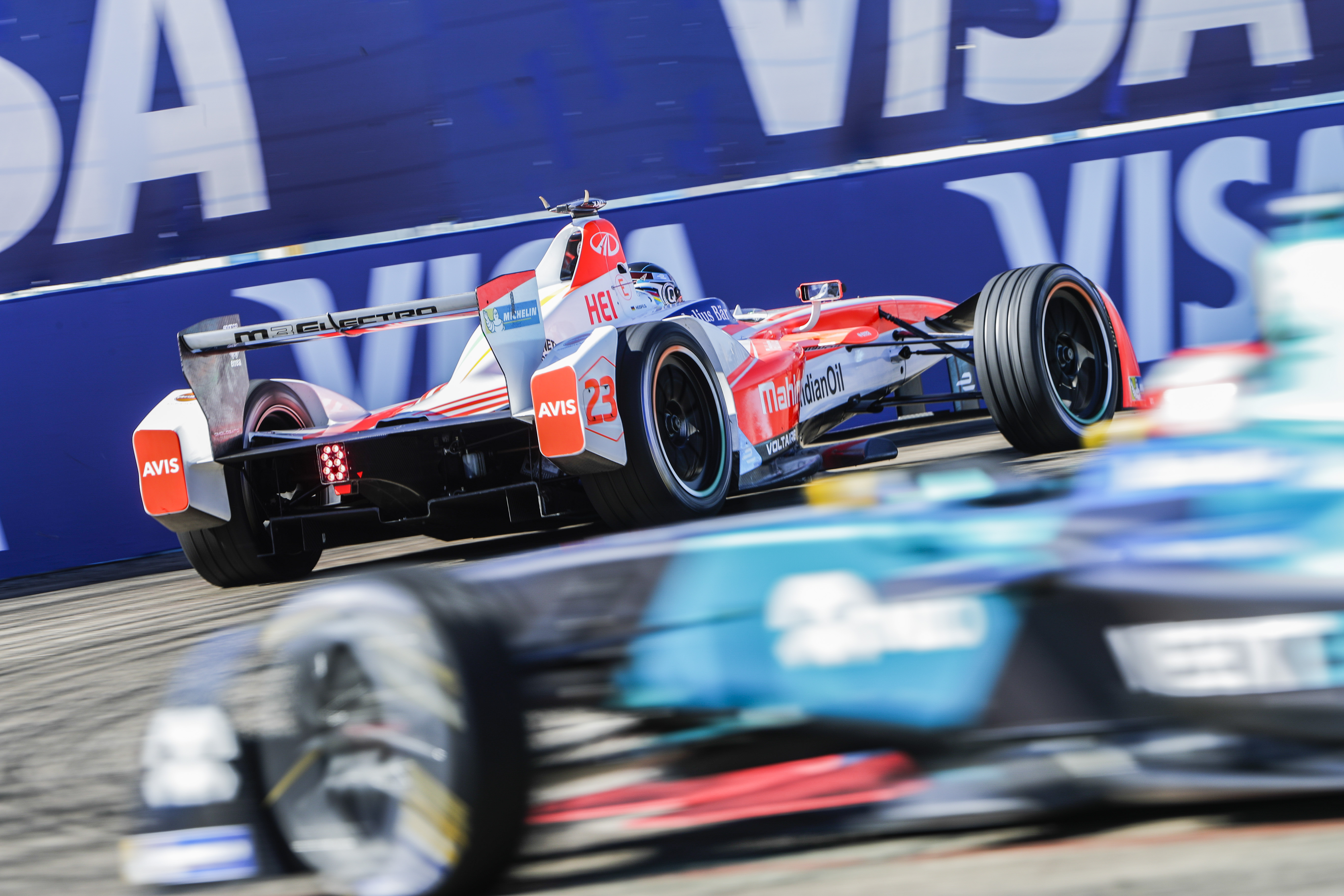 As race-leader Rosenqvist built a two second gap to Buemi, the sister Mahindra of Heidfeld began a charge, making up five places to run fifteenth, after starting from the back due to a sensor issue in qualifying. Sixth place Oliver Turvey saw a handful of positions lost, as the ABT Schaeffler pair of Di Grassi and Abt passed the Brit, leaving him in the clutches of eighth place Nico Prost. In the faster Renault e.Dams, Prost made a the pass stick, seeing Turvey down into ninth. Heidfeld’s charge continued, meanwhile, passing the Andretti pair of Da Costa and Frijns, into twelfth place.

By lap thirteen, Heidfeld had found another position and was closing in on the Jaguar of tenth place Evans, an incredible comeback from the German, proving the pace of the Mahindra at this track. On lap 17, while fighting for third, the DS Virgin pair committed the cardinal sin of hitting your teammate. The pair banged wheels going side by side into turn one, resulting in Bird running wide and losing two positions to Vergne and Di Grassi, leaving the Brit in sixth, and with Daniel Abt on his tail. The team’s luck didn’t improve as Bird dropped further down the order, overtake by Abt and Prost, and fourth place Vergne passed Lopez for third.

As the leaders pitted on lap 23, Mahindra’s troubles began. Heidfeld, now struggling with energy management thanks to his his earlier surge, nearly collected Rosenqvist, as the latter made the swap into his second car. Race-leader Rosenqvist was immediately placed under investigation for unsafe release, and subsequently issued a ten second time penalty. With Buemi running close behind in second, and Di Grassi some twelve seconds behind their pair, Rosenqvist’s win was effectively relinquished. Dragon Racing found trouble in the pits, too, with D’Ambrosio penalised for being under the minimum pit stop time, a 5 second time penalty seeing him drop out of the points and finish thirteenth. The Jaguar of Evans was another casualty, losing places to emerge in a lowly eighteenth.

As the pack settled into the second half of the race, fourth place Di Grassi began to line up third-place Vergne. After some aggressive over-defending that saw a warning from his team, Vergne was eventually forced into an error that saw him run wide and allow Di Grassi through. Dragon’s woes continued, meanwhile, as Loic Duval stopped on track and crawled into the pits, ending his day early. The Venturi of Engel, the other casualty of contact with Duval at race start, returned to track some twenty-eight laps down, attempting to recoup a handful of points for fastest lap. 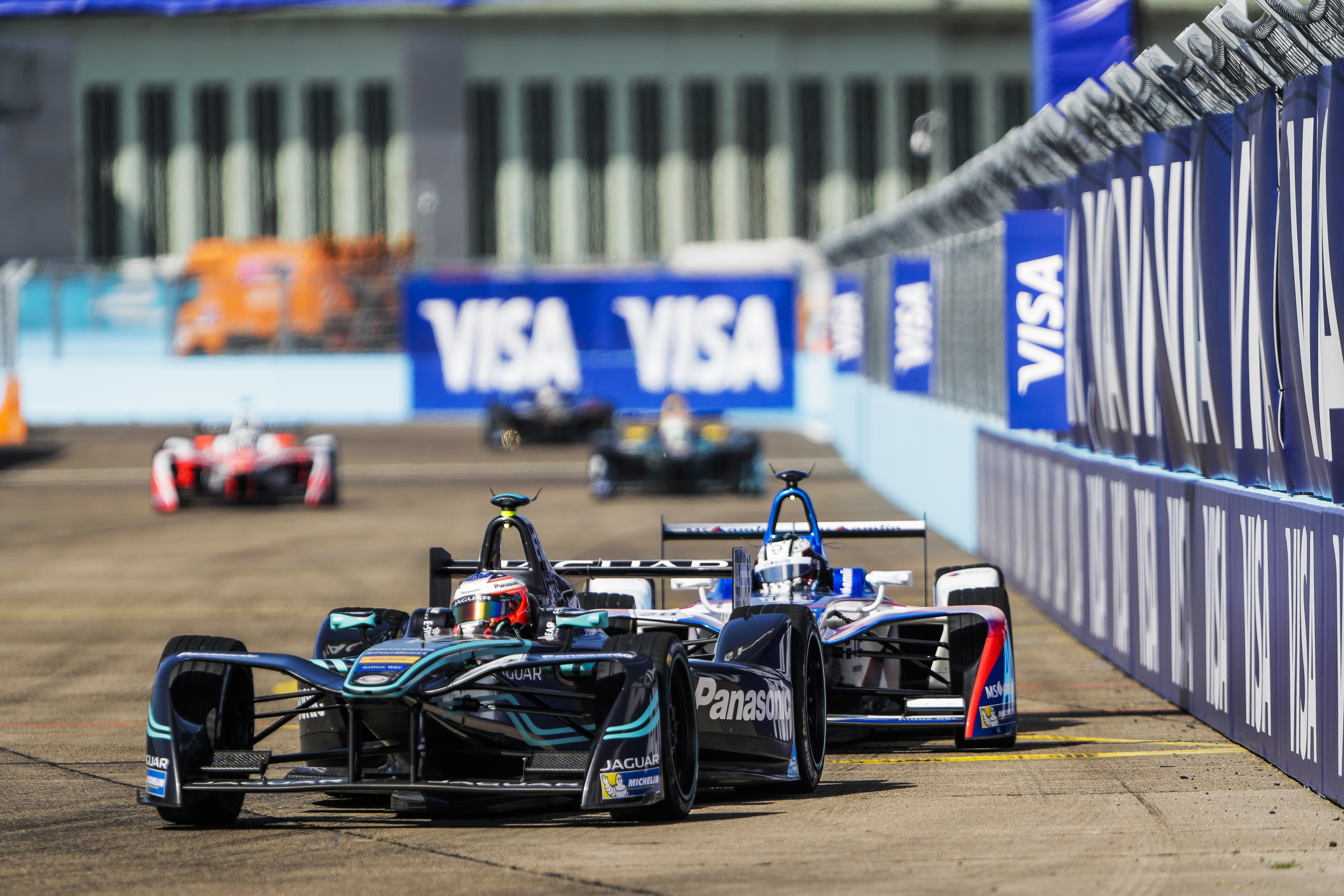 In the closing stages, the top four of Rosenqvist, Buemi, Di Grassi, and Abt were left to their own devices, running a quiet race, as a train began to form behind fifth place Vergne, leaving him in the clutches of Lopez, Bird, and Prost. After a number of attempts, the DS Virgin made the move stick, with a stunning move around the outside of Vergne, in the braking zone of turn nine, moving Lopez up into fifth. DS Virgin teammate Bird almost made a similar move work, but was forced to back out after Vergne’s aggressive defending continued.

At the checkered flag, it was a rueful day for Rosenqvist, a lights-to-flag victory scuppered by a mistake from his team. Buemi crossed the line in second, but inherited the win, with Di Grassi in third, followed by teammate Abt. Lopez took the spoils of his battle with Vergne to take fifth, ahead of the Frenchman, with Bird in seventh, Prost eighth, and Turvey ninth. Heidfeld’s confident charge was enough to see him coming from last, and surviving a collision with his teammate, to claim the final points position.

The FIA Formula E Championship now moves Stateside for a double-header in New York. Round 9 of the championship resumes on July 15 and 16.