Lucas Di Grassi took his maiden pole position in Formula E, after an accident-laden session in Argentina, ahead of the Buenos Aires ePrix. Jean Eric Vergne joins Di Grassi on the front row, keeping a car between the Brazilian and his championship rival. Buemi and the NextEV NIO of Oliver Turvey make up second row of the grid, their team-mates Piquet and Prost on row three respectively, with Evans, Rosenqvist, D’Ambrosio and Bird making up the top ten. Home man Jose Maria Lopez saw an accident in qualifying end his woeful day in P18.

After a stop-start set of practice sessions with excursions into the wall for Da Costa and Di Grassi, the pack were keen to hit the track uninterrupted. Group one saw Frijns, Bird, Engel, and the Jaguar pair of Carroll and Evans. Sam Bird headed out first, hoping to capitalise on a strong lap time in FP2. However, a scrappy lap with a lock up at T1, and a nudge into the wall at T7, saw an beatable time of 1:09.839. Decent laps from Frijns and Carroll saw the pair slot into second and third respectively. However, a good middle sector for Evans saw the Jaguar driver capitalise on Bird’s messy lap, finishing quickest, with a 1:09.505. Maro Engel ran into trouble, his Venturi stopping on track, and despite a restart, didn’t set a 200kW time, and will start at the back of the grid. 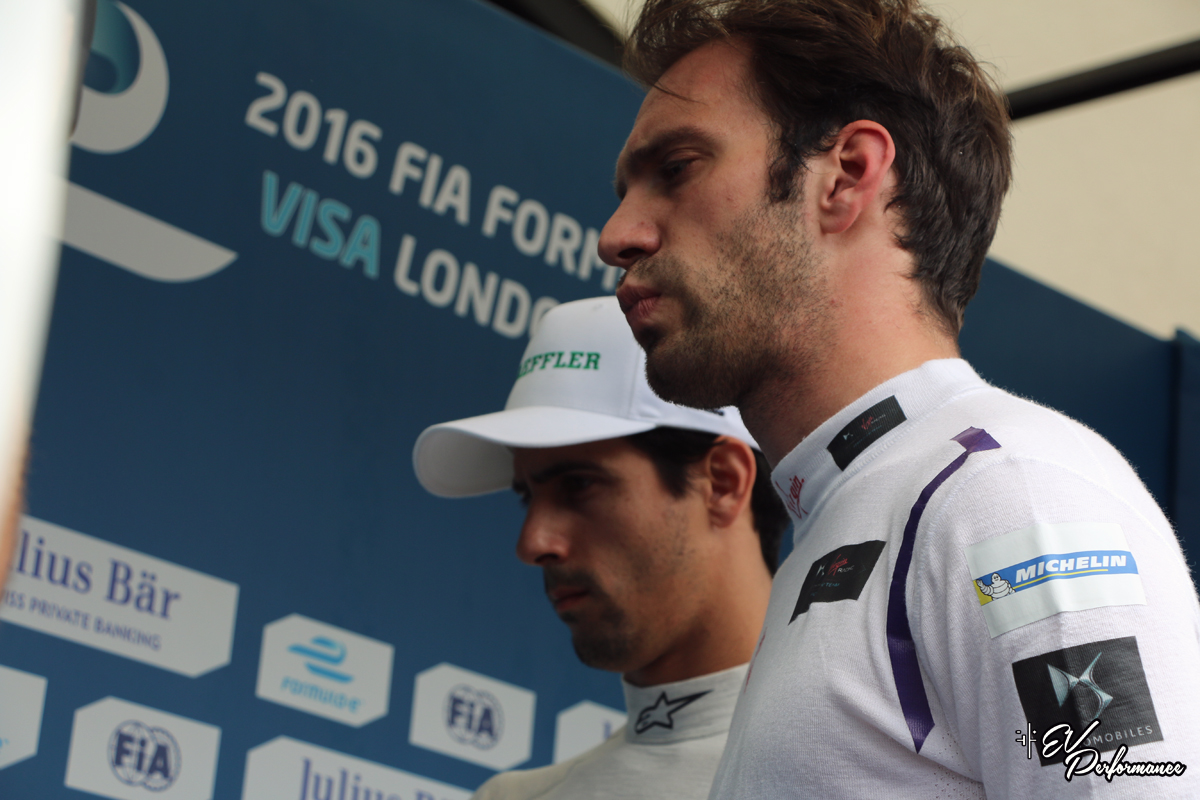 All eyes were on group two, with championship rivals Di Grassi and Buemi going head-to-head, joined by Vergne, Piquet, and D’Ambrosio. Buemi and Di Grassi took to track immediately, followed by Piquet and D’Ambrosio, with Vergne waiting his turn. Reigning champion Buemi jumped to the top of the timesheet ahead of Evans, with an initial time of 1:09.018, with Di Grassi slotting into close second (1:09.084), and Piquet (1:09.383) into third. D’Ambrosio took intial fifth, as Vergne began his flying lap. A clean and pacey lap from the Frenchman saw the Techeetah take the top spot, a quarter of a second up on the e.Dams of Buemi.

Home hero Lopez, alongside Da Costa, Duval, Rosenqvist, and Sarrazin, took to track in the penultimate group session. Da Costa stopping on track saw a yellow flag, but he managed to reboot his problematic Andretti. Lopez’ 200kW lap saw him quicker than Vergne in the first sector, but the DS Virgin driver pushed too hard and struck the wall. Disaster struck again for Lopez, as he stopped on track and red-flagged the session, scuppering his hopes of super pole. Amidst the chaos, Felix Rosenqvist took his Mahindra just outside of the super pole, in P6. A scrappy lap from the Dragon of Duval saw him initial P9 (1:10.257), with the Venturi of Sarrazin ahead in P8 (1:10.100). Da Costa – on a flying lap when Lopez flagged the session – was allowed to complete his lap. However, the Andretti driver’s day went from bad to worse as he ended the session in the wall at the start of his flying lap, breaking his suspension, and starting the race from the rear.

The final group session saw Hua, Turvey, Prost, Abt, and Heidfeld attempt to best the times of the pack. Nico Prost saw a clean lap into P5, knocking Evans out of super pole, but the Renault was swiftly deposed by the NextEV of Oliver Turvey, seeing the Brit into P4. In a mirror of his team-mate’s FP2 crash, Daniel Abt ended his session in the wall, but managed to crawl across the line in P16. Ma Qing Hua’s session ended in similar disaster, crashing in the same spot as Abt and ending his day in P19. Heidfeld crossed the line, thankfully unscathed, in P11. An eventful session ended with Vergne, Buemi, di Grassi, Turvey and Piquet into the Super Pole session.

Piquet was the first on track for his attempt at pole, but a lost half a second to a lock-up, and despite competent drifting, set an off-pace time of 1:11.274. Despite struggling with grip in the same place as Piquet, NextEV team-mate Turvey finished 1.1 seconds ahead. Although initially down on Turvey in the first sector, Di Grassi showed his skill with a much cleaner T7 than the NextEV pair, and took provisional pole with a 1:09.404. Championship leader Buemi began a clean lap, chasing down the Brazilian, but a lock up threw the e.Dams offline, placing him down by half a second in the first sector split. Buemi was left trying to limit damage with a careful middle sector, and couldn’t beat Di Grassi’s time, slotting the championship leader into P2. Vergne was the final car on track, and despite a huge lock up, did enough to put himself in P2, between the Brazilian and his championship rival.

The race starts at 4pm local time, 7pm GMT. Keep it EV Performance for a full report on what promises to be an exciting race!