Humans, feel smug once again: it seems like we might be worthwhile on this planet for a little while longer after all.

Because in one of the first ever Roborace events – the driverless series which now follows each Formula E races in an attempt to push autonomous and EV technology – a front-running Devbot suffered an unfortunate crash while exiting a corner on the Buenos Aires street circuit today.

Despite being able to previously detect and dodge a stray dog on the track (as if it couldn’t get any weirder), the 116mph, fully-sized race car got a little too excited and nailed the throttle mid-corner, careering it into the barrier. 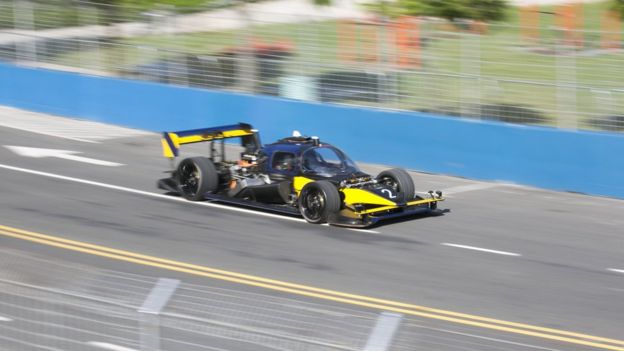 What was it thinking?

“One of the cars was trying to perform a manoeuvre, and it went really full-throttle and took the corner quite sharply and caught the edge of the barrier,” Roborace’s chief marketing officer Justin Cooke told the BBC.

“It’s actually fantastic for us because the more we see these moments the more we are able to learn and understand what was the thinking behind the computer and its data.”

Pictures of the damaged car were published on an Argentinean blog, complete with the tongue-in-cheek reassurance that ‘no drivers were hurt in the crash’.

We may be laughing now, but it’s surely only a matter of time until computers can start lapping circuits quicker than us mere mortals…

Check out our Buenos Aires Formula E race report here. The next race takes place in Mexico City on the 1st April.

CES so far: new Leaf on the way and autonomous concepts aplenty

2017 is the year of self-driving if the CES show is anything to go by...
Company News

What comes after Ludicrous Mode? We can't even begin to imagine...
Company News

Car seems to focuses on weight loss for optimum performance...