FE testing: “Every racing will be electric in the future – that’s very clear” – Di Grassi

In the first of our series of driver interviews, EV Performance‘s Laura Prior caught up with Abt Schaeffler Audi Sport’s Lucas Di Grassi, at Formula E testing in Donington, for a quick chat. Read what he had to say about his expectations for the forthcoming season, the battle with Renault e.Dams, his first time in an EV, and the prospect of a Di Grassi-designed ePrix in Sao Paolo!

EVP: Lucas, tell us, what have you been up to since London? Have you managed to have a break?

“Well, there was no break! There was a WEC race, but in Formula E standards, we’ve been preparing the car, did a little bit of testing, but at the moment the busy schedule is two races of the WEC, in the next two weeks.”

EVP: It’s always difficult to read into car performance at Donington, as it’s a far cry from the twists and turns of a street track, but how does the car feel now you’ve had a chance behind the wheel?

“The car is good. Again, the Renault feels in front of everyone, but again Donington is difficult – you can have a reference, but you cannot understand the full performance, but for sure it’s important to start on the right foot.”

EVP: What about your thoughts on the new front wing? Do you feel there’s any aerodynamic benefit, or do you think it’s purely an aesthetic decision?

“No. No aerodynamic impact. It is just aesthetics, it’s more rigid, it looks better. So yeah, I’m in favour of it.”

EVP: Formula E is integral in pushing the development of EVs, and popularising them with the public. Do you remember the first time you drove an EV, and what your thoughts were?

“The first time I drove an EV was a Tesla, in 2010, and I thought it was pretty good. So, when Formula E came up, I was the first driver to join the series, to help a little bit with organising it and the development, and I’m really proud of what we’ve achieved in these years.”

EVP: How do you see the growth of Formula E? Do you think it’s a matter of time, as it’s a series in it’s infancy, before it becomes more widely respected as the technology develops. Or do you feel it’s always in danger of being seen as niche racing?

“No, it will be mainstream racing in a couple of years time. The point is, how many years, if it’s five, ten, or twenty, but in the end, every racing will be electric in the future – that’s very clear. It’s just a matter of how long it will take until combustion engine becomes niche racing.”

EVP: There has been a great deal of debate about Fanboost. Many see it as a gimmick, while others see it as great for fan involvement. Do you think Formula E should get rid of it altogether?

“No, the concept of Fanboost is very good; I’m in favour of it, because we have to connect with the younger generation and with the fans. But of course, some teams are cheating with Fanboost, so there needs to be a better way of voting, and my suggestion is that it be social media only, instead of internet voting.”

EVP: You were highly praised all season, and I think many thought you deserved – on the basis of results and consistency alone – to take the championship. Can you talk us through your thoughts on last season?

“We lost the championship in Mexico, with the disqualification, and the 28 points, but we did a very very good job last season. We did everything perfect except for this disqualification in Mexico, so we can be very proud and try to repeat it this year.”

EVP: In hindsight, was the season closer in Battersea a little bit underwhelming for you, as it was essentially decided by a fastest lap? Do you think we should scrap fastest lap points?

“Yes. I think the points format should be the same as F1.”

EVP: As a team, how confident can Abt Schaeffler Audi Sport be of closing the gap to Renault, as there are only – realistically – so many developmental gains they can make?

“Not very confident. I think they still have an advantage over everyone else.”

EVP: Looking to this year, the calendar has changed significantly. Some great new destinations. Any race you’re particularly looking forward to?

“I think Hong Kong will be mega! Monaco again, Paris again… I think pretty much all the tracks are special, so I think the calendar is just getting better. We’re getting rid of the more boring ones, and getting more exciting cities on board, so that’s great.”

EVP: Regarding the calendar, some criticism of the championship is that races are spaced out so widely over the year, it’s difficult to retain an audience. Do you think the season should be shorter?

“The season could be shorter, or there could be more races, which I think will happen soon.”

EVP: Do you think that a Formula E race in Brazil would be appreciated by fans, with the country’s rich motorsport history? And which city would be the most appropriate in your opinion?

“Sao Paolo, I’ve designed a track already, in a park, and there’s a reasonable chance it happens in the next five years.”

EVP: What are your goals for this season? Third time lucky for the championship, or are you happy to take it race by race?

“Take it race by race. We don’t know the performance of the others, you can just really, you know, every race try to be consistent, try to win every race and try to see how much points and podiums we can get, and that’s the same approach as last year.” 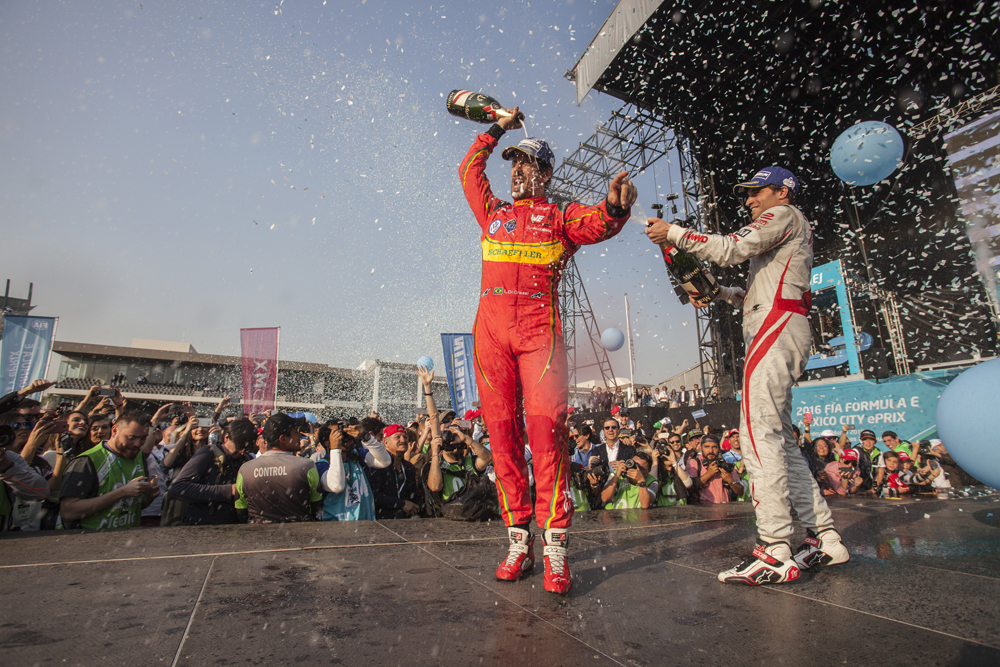 Lucas Di Grassi saw a consistent start to his season three campaign, at Donington Park Circuit, for the first of Formula E’s season three tests. On Day 1, Di Grassi slotted into third overall (1:30.947) behind the Renault e.Dams of Sebastien Buemi (1:30.143) and the Mahindra of Nick Heidfeld (1:30.894), running 33 trouble-free laps. The Brazilian dropped to sixth fastest (1:30.777) on Day 2, running 35 laps. However, with the top six were separated by only six hundredths of a second, and with times at Donington failing to accurately reflect the nature of a Formula E track, there is little value in reading into early results with too much scrutiny. Di Grassi rounded off the final day of pre-season testing in fifth position on, with his best time of the week, 1:30.252.