What a way to end the 2015 batch of Formula E races! The Punta ePrix was never going to disappoint, but even we weren’t expecting such an electrifying hour of racing. As the drivers and teams descend to the beach, we look back on the Uruguayan round of this extremely exciting championship…

No one was expecting a race the one we got in Punta del Este. With the track situated next to the beach, the off-line areas of the track were dusty, slippery and bound to cause an accident. But, on a plus note, if any driver did crash, they would be able to go to the beach and chill out!

As the lights turned green Prost was caught napping, losing several places, along with Duval and new boy Oliver Rowland. D’ambrosio and Abt seemed to have rockets on their rear wings, flying off the start line and towards the first turn. Surprisingly, Buemi didn’t make any places up, leaving us wondering if he had already been outdone.

A few laps into the race, Senna somehow managed to pick up a puncture. No one knows where or how he managed to get it, so he must have driven over something sharp or pointy. But, this did mean that we got to see a tyre change, which is a rarity in Formula E.

Suddenly, Buemi managed to conjure speed out of nowhere, managing to mix it with energy conservation at the same time. He went up the inside of Duval into the hairpin, took on Sam Bird and went on the hunt for D’Ambrosio. After a lap of having his mirrors full of blue and yellow, Buemi passed Jerome for the lead of the race.

Equally as suddenly, Berthon spins into the wall, collecting Vergne as he goes. There’s no damage, but he drives out into the path of Nelson Piquet Jr.

After the tyre incident, we found Senna in the wall at turn 17. He was able to get going again.

Di Grassi was sliding like it’s going out of style behind Duval, wanting to get past like anything, but having to use our old friend lift and coast at the same time. But, Duval had a massive snap of oversteer and took out a bollard on the side of the track. He was lucky to get away with no damage.

After nearly taking out Piquet Jr earlier in the race, Berthon made it very tricky for three cars to get past, pretty much blocking them. It’s not the first time he did that but there were no crashes or broken wings.

After not much lift and coast, Daniel Abt, Stephane Sarrazin and Oliver Turvey pitted, only to not lift and coast much in the second car. Di Grassi came in way to hot into the pit lane, screeching the tyres like someone was being murdered before nearly crashing into the back of a Virgin, but just making it into the pitlane at the right speed. He was accused afterwards of backing up D’ambrosio so that he could come out before him. But, Buemi was the first out, Di Grassi leapfrogged the dragon cars who were next and Oliver Turvey received a penalty for doing his pitstop too fast.

As he came out of the pits, Bird began slowing, finally cruising to a halt somewhere on the track. After working his magic, the car started to move again, but was stopping and starting for a lap. We then found him parked in a grid box next to the marshalls, trying the stop-start procedure again, but this time the magic had stopped working. Sadly, we didn’t find him on the beach after his debrief.

Jean – Eric Vergne had had a terrible day. So, he vented all his frustrations to Nelson Piquet Jr. After a few laps stuck being the Brazilian, he wanted to get past and he wanted it bad. After attempting a huge lunge, running wide and giving Nelson the place back again, he settled back behind him…waving his arms around in a very ‘elegant’ but angry manner. After one more lunge, Nelson hit a corner, sending him into the wall on the straight. That was the end of his race but Vergne carried on until the end. It seemed a rather unusual accident for a world champion.

The safety car wasn’t brought out, but the last lap crash ensured that there would be no overtaking in the crash area.

After an eventful race, Sebastien Buemi takes the top spot on the championship table, with Lucas Di Grassi just one point behind.

After a 48 day break, we’re back with another sizzler: Buenos Aires. 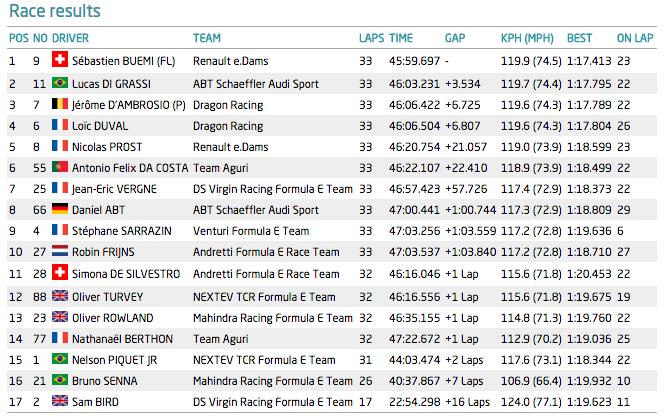