Following the meeting of the FIA World Motorsport Council in Geneva today, the FIA Formula E championship has revealed its 2017/2018 calendar, adding three new venues to the fourth season of the all-electric championship.

Italy, Chile, and Brazil have been added to the calendar, with Rome, Santiago, and Sao Paolo respectively, forming the new venues for the 2017/2018 campaign. With fourteen races, comprising of three double-headers, and one TBA venue, the calendar both is the most busy and the most compact of the series, since its 2014 inception.

The fourth season hits the ground in Hong Kong, the inaugural race now a double-header, on December 2 and 3. The first race of 2018 sees Formula E returns to Marrakech in January, before moving to three races in South America in February and March, with new venues Chile and Brazil split only by a return to Mexico City. The European season follows on April 14, with Formula E’s first foray into Italian soil, followed by a return to Paris, a TBC venue in Germany, and finally a TBA venue in June, potentially a much-discussed Swiss race in Zurich.

The fourth season again concludes with a pair of double-header races in New York and Montreal, in July, with the former awaiting a final date confirmation.

Formula E founder and CEO Alejandro Agag, said: “It’s exciting news to welcome a number of new host cities on the Formula E calendar, as well as seeing existing locations build on the success of previous events. Formula E is continuing to expand the calendar and the number of cities in key markets, in addition to the growing list of partners and manufacturers joining the electric revolution. Our priority is to consolidate a calendar with long-term agreements with host cities – the schedule for Season 4 is a step in the right direction.”

The full calendar is as follows: 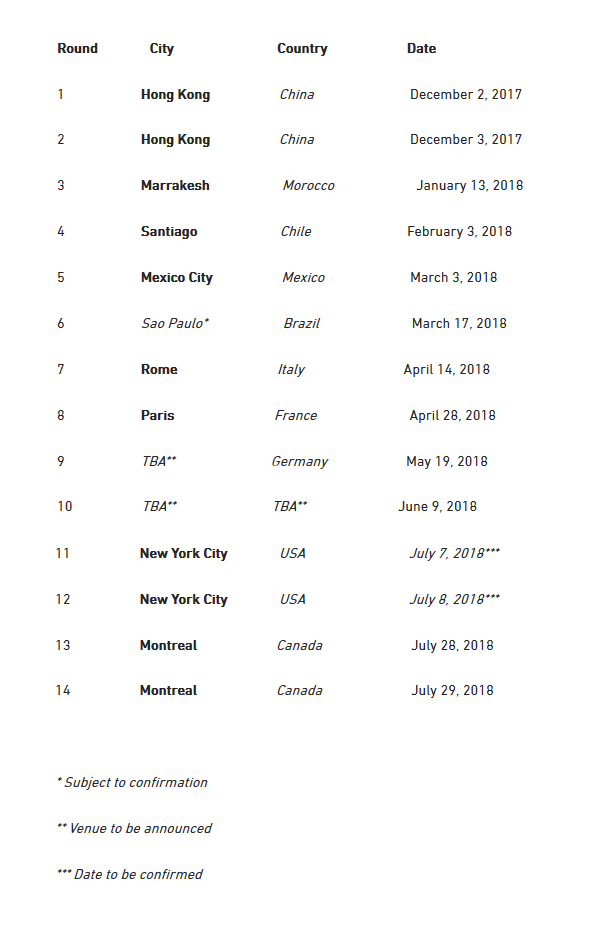