We caught up with Emmanuel Falade, a student at London’s Kingston University, as he and a team of engineering undergraduates attempt to create an electric motorcycle to race in an upcoming Isle of Man TT road race.

This isn’t the first time the university has been involved in such a challenge, as Emmanuel explains for us now…

Knowing the Isle of Man then you must have heard of Isle of Man TT road race. In 2009 the island hosted the first alternative energy motorbike race named TT XGP. Non fossil fuel powered bikes were allowed to enter the race where 1 lap of the mountain course had to be completed in 45 minutes or less. The following year this race was renamed to TT Zero and stated that only electric motorbikes could take part.

The Kingston University e-Racing Electric bike team was started back in late 2008 by former lecturer Paul Brandon at Kingston University. Paul Brandon gave a speech in the Science Museum in London at the official launch of the TT XGP in 2008, and explained that his electric bike project would be the start to an amazing and interesting journey in the engineering world for Kingston University. The bike was designed and built by university students and used cylindrical lithium ion batteries, weighed 210 kg and had a power of 45 kW. This bike then went on and competed in the first Isle of Man TT race in June 2009 ridden by Scotsman Dod Spence. Even though the bike suffered a motor failure, the university recognised the effort and science behind the team’s work, and supported the team that continued to develop the bike. For students this was the great opportunity to get some ‘hands-on’ experience and also learn how to work and act as a real racing team.

The following year new bike was built with a new AC induction motor; it was built in collaboration with Williams Motorcycle Company. The team competed at the newly named TT Zero 2010 race. This time Dod Spence took the bike around the island and finished with the 5th place. Therefore, things were clearly on the up! Also, Paul Brandon entered the TT XGP race series at Brands Hatch with a rider Adam Palfreman. This was even more successful race as the team finished 2nd. However, Paul and the team already had idea of a new bike.

For TT Zero 2011 the first Ion Horse was born, with full support of energy company Ecotricity who were behind name of the new bike and Vepro. Ion Horse Mk 1 was built in seven months’ time and had very promising stats: top speed of 140 mph, 0-60 mph in 3.5 seconds and peak power of 100 kW. All of this on two wheels with the Scotsman riding again around the island secured podium position at the race – team Ion Horse finished 3rd. 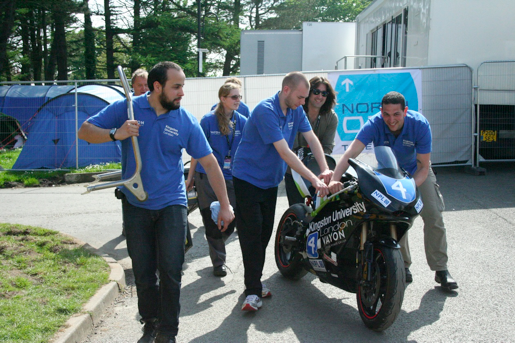 TT Zero 2012: Ion Horse Mk 1 and Ion Horse Mk 2 entered the race. Kingston team were in high spirits about both bikes, but unfortunate happened and both bikes were forced to retire. There is a great emphasis placed on the fact that both electric racing bikes were fully designed from the ground up, with students involved in all key areas such as chassis design and the development of the control systems. Of course, there are components that the team does buys like wheels, brakes and the front fork assembly. Later in that year the team experienced a huge loss when fire broke out at the Automotive lab at the university and completely destroyed Ion Horse Mk 1 together with most of the equipment and machines in the lab. Luckily, Ion Horse Mk 2 was saved with little damage.

Through months leading to TT Zero 2013 Paul and the always changing student team put all their efforts into rebuilding Ion Horse Mk 2. In the race, 15 bikes entered, 11 had made it to the start line and only 8 finished the race. Kingston University came 4th and won the fastest UK University prize beating Imperial Collage London and Brunel University.

In the TT Zero 2014, the team faced a problem since the team’s leader Paul Brandon left and the new rider Shaun Anderson, a former Kingston University’s Motorcycle engineering student, had an accident on a bike before the first qualifying lap. The team then had to not only make sure that the bike was running, but also find someone who was willing to ride it. Fortunately, former rider Dod Spence, who previously took the Ion Horse to the podium at 3rd place, was willing to step up. Unfortunately, the Ion Horse suffered exhaustion just less than 8 miles into the course. Unable to compete, the team’s hopes were crushed. However, things started to look up since the team were invited after the race to give a presentation at the IET lecture which was about the TT Zero race.  Ryan Duffy and Max Burras presented the team to other engineers, other competitors and His Legacy Excellence LT Governor of the Isle of Man. The IET have awarded the team of 2013/14 a prize for their efforts and the IOM TT races. 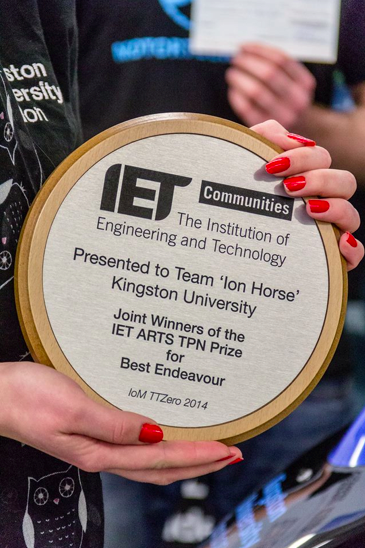 The year 2015 had similar luck in store for the team, they had made the necessary preparation for the TT however during the testing sessions issues arose with regards to the battery, the fault was discovered through analysing data from a data logger that was installed on the bike by Vector a few wekks before departure.  With the uncertainty regarding the battery the team was forced to pull out of the race at the last minute.

This year was supposed to see the team enter the Moto E racing series for the first time, which was sure to be an exciting experience for the team even more exciting when you think that at the time it was going to be a team of first year students contending for the championship, with the guiding experience of the 3 senior team members who graduated this year. However due to limited funds the chances of acquiring a new battery in a short amount of time was very slim. The Moto E is a five round European track race for electric bikes, seeing that electric superbikes have taken the lead in the progression of clean vehicle technology since the Isle of Man TT races.

The 2014/2015 team consisted of 12 members 2 students in their final years and 2 Business students as well as 8 first year students. Since then the team has grown considerably and is currently made up of a mixture of engineering students this year ranging from 1st year through to 3rd and they slot in to 4 sub teams, Chassis, Powertrain, Drivetrain and Faring. Who will still working on the Ion Horse design with many more developments and improvements to bring to the race track and TT Zero 2016. As well as begin the designs for a new improved bike for future seasons. The disappointment of not being able to compete in both the TTZero and the Moto E series has no doubt increase the teams desire for success with the project. 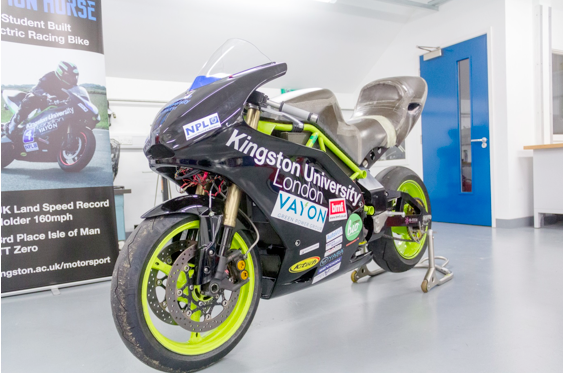 The team has had an unexpected number of students join so a structure had put in place to increase effectiveness whilst maintaining management. As it stand the team is headed by Matthew Bottomley and Project manager Kino La Chica. Then there are the sub teams headed by Rav Bharij (Fairing), James Iveson (Powertrain), Emmanuel Falade (Chassis) and Ricardo Antonini (Drivetrain).

The current bike has a total voltage of 500 volts, 140kW and can hit 0-60 in 3 seconds! This bike is built and designed by students as an extra-curricular activity. The team are currently trying to get other schools of the university involved, such as the Business school and the Fashion and Arts school to help fill in the skill gaps. Great help comes from British Motorcyclists Federation and its Financial Director Howard Anderson, who is not just the father of the rider Shaun, but also great bike mechanic and motorbike enthusiast. Thanks to them, the Ion Horse featured the front cover and the main article of BMF’s Motorcycle Rider Magazine winter issue. However, there are many more sponsors involved in the project that the team are very grateful to: Vayon Green Power Group, YASA Motors, Sensor Technik UK, Motortourer, AutoVolt Magazine, Bruntingthorpe, B-Tech, C-Tech Composites, K-Tech Suspension, AnyTech Print (you can see a pattern here!), Goodridge, Vepro, Ace Cafe, Drive eO and Kalup Machines.

The fundamental goal of the project in regards to the University is to help develop students into the practical engineering world whilst at university. It is an extra-curricular activity which students can put into action themselves with the theoretical and practical aspects that they would have studied in their lectures. The aim for the students is to build confidence from within and provides an opportunity to apply skills and knowledge acquired from the Engineering courses to real life applications.

What comes after Ludicrous Mode? We can't even begin to imagine...
Company News

Could this be the first electric car to persuade people over to the dark side...?
Company News

Car seems to focuses on weight loss for optimum performance...