Jerome D’Ambrosio Interview: “We need to be not the dark horse, but championship contenders.”

In our next in the series of driver interviews from Formula E’s pre-season test at Donington Park earlier this month, Laura Prior caught up with Dragon Racing’s Jerome D’Ambrosio. Despite DS Virgin’s Sam Bird’s best efforts to sabotage the interview, they chatted about the team’s partnership with Faraday Future, Jerome’s tourist recommendations for Brussels, and his in-depth thoughts on FanBoost!

EVP: Jerome, we’re back on the road again, and looking forward to season three. Tell us, what have you been up to since London? Have you managed to have a break?

At this point, DS Virgin’s Sam Bird interrupts us with a banana strategically placed down his racesuit. Jerome issued a few choice words in Sam’s direction that we couldn’t possibly print, before we continued the interview. A great example of the camaraderie and fun that goes on in the Formula E paddock!

[laughing] “Sorry, what did you ask again?”

EVP: Have you had a break?

“Yeah, I’ve had a couple of days.. a week. In the end between private testing and this, time runs by pretty quickly.”

EVP: It’s always difficult to read into car performance at Donington, but how does the car feel? Now you’ve had a chance behind the wheel?

“Yeah, since yesterday we put it on the ground and we seem to be up there. Having said that, it’s still Donington, like you said, but it’s a good feeling to put the car on the ground and to be relatively quick. But, it seems like e.Dams is still very strong.”

EVP: What about your thoughts on the new front wing? Do you feel there’s any aerodynamic value, or benefits – not losing the front pods on a kerb, for example – or do you think it’s purely an aesthetic decision?

“No, it does change the aerodynamics. You gain a little bit of downforce, and have to readjust the setting. But it’s much more solid, as last year we had a lot of problems with the front wing on the bollards, so… all around it doesn’t have any affect as you can balance it with the different settings, so it’s not going to change anything. But it’s different, and stronger, so that’s good.”

EVP: The big news for the team is Dragon’s new partnership with Faraday Future. Has that come too late for any significant input into the season three car? If so, what impact do you feel it’s going to have, going forward into season four and beyond.

EVP: With Faraday making their name in the EV field, and Formula E pushing the development of electric road vehicles, I have to ask, do you remember the first time you drove an electric vehicle, and what your thoughts were?

“It was a Tesla. It was one of the first Tesla’s, a couple of years ago. I found it very impressive, as an electric motor has lots of power, lots of torque, and although it is not noisy, it’s actually working very well, and can feel very powerful.”

EVP: Looking back, you had some strong results for you last year. What were the highlights of last season for you? Punta, Mexico, London?

“I think two poles last year were my highlights. Clearly the pole positions. Then the win of course was great, and the podiums were great, but pole position is outright speed, and it’s good to be in front of the pack. But that podium feeling in Mexico, even in second place, was just amazing.”

EVP: Moving forward to this year, we have some really cool tracks. Montreal, New York…

EVP: “I was coming to that one! Any you’re particularly looking forward to?”

“Brussels! [laughs] I mean racing down-town in Montreal, New York, but Brussels is going to be a special one for me, for sure!”

EVP: On that note, back in season one, you actually said “it would be awesome for me to race in my home city of Brussels, and New York would be unbelievable.” Apart from wanting to know if you’re psychic, can you give our readers any tips on what they should do if they go to Belgium?

“I am psychic, watch out! [laughs] Well for sure, you have Brussels down-town is quite nice, the Grand Place, the Atomium, mini-Europe, that’s quite interesting. I would really recommend they go to Bruges as well. Bruges is a lovely town, a little bit North, an hour or so from Brussels.”

EVP: Leaving behind your tourist recommendations, and back to the series, one criticism of the Formula E championship is that it’s spaced out so widely over the year, and makes it difficult to retain a core audience. Do you think the season should be shorter?

“Well, no, I would think that the season should stay the same, but fill in a couple. I’d love to have a season, instead of ten or eleven weekends, we have more like fourteen weekends! If you had three races in-between Hong Kong and Buenos Aires, I think it would be a fairly nice calendar.” 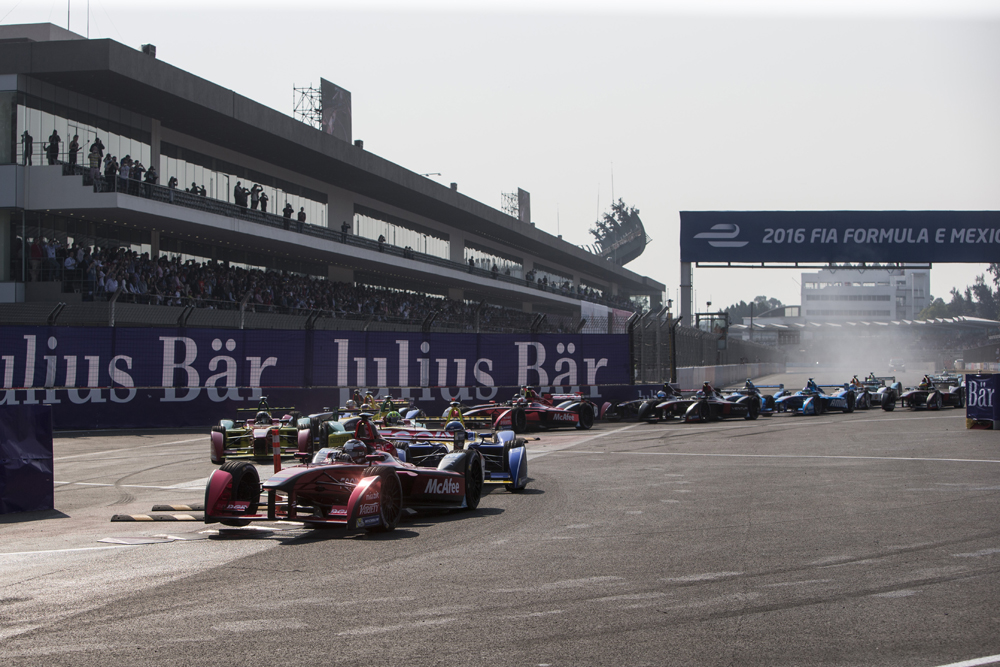 EVP: One of the other aspects of Formula E that sparks lot of debate and criticism is the FanBoost. I wanted to ask your thoughts, as you have spoken out in favour of it before. Do you still feel the same, or would you change any aspect of how it works?

“Yeah, I’m definitely in favour of it. You have to be open-minded with that, and bear in mind I only had it once in two years. I’ve got overtaken twice on it, and so I think I can have a pretty objective view on it! But a lot of people will say it’s unfair. It’s not about being unfair or not for the driver, it’s about how do you manage to bring the fans closer to whatever you’re doing? Down the line, it is fair. Try to get it, and if you don’t get it… it’s part of the thing. But one thing for sure is that motorsport and sports in general, they have to involve the fans, and fans have to be happy. I think that maybe there are guys that are saying it’s not very fair, but you have to think about the wider audience, the ones that want to interact, that don’t just want to watch the game, but be part of the game. And that’s the future, and you cannot just ignore that. And the people who do ignore that won’t satisfy the needs of those fans, and then the sport won’t be as popular as it used to be.

I mean you have to look at the automobile market. Some people are thinking, ‘OK, we’ll make the best cars and people will buy it.’ But fifteen or twenty years down the line, maybe earlier than that, people won’t really own a car. Cars won’t really be down in the centre of the cities, and even manufacturers have to revision completely, and have a completely new look at how their business model is going to work. Everything is changing, and so fast. That’s like that for this [Formula E] but it’s like this for mobile phones. Look at phones from fifteen years ago, and companies that were at the top, like Nokia in 2007, look at where they are now? iPhones everywhere! You get such a quick and fast turnover, so what was true yesterday is not true today, and that’s very much today’s society. Therefore, I think that’s very much the same for sports. Sports needs to understand that, and see that if you don’t evolve with your time, it might just be gone in fifteen years, because it’s irrelevant. And that’s why I think it’s a bigger view than just ‘is it fair or not fair?’ FanBoost is great, because it’s an attempt to get closer to the fans and interact, and that’s what the fan wants.”

EVP: Finally, Dragon Racing have always been dark horses, I think, showing absolute brilliance at times, and others just missing out. What are your personal goals for this season? What’s achievable for you and the team?

“We’ve had two seasons top five. We want to be a consistent contender up there. It’s not going to be easy. Like you say, the Faraday deal came pretty late, but we’re working hard for that. We need to manage to be not the dark horse, but the championship contenders – both team and drivers.”