What would your boss give you if you did particularly well at something? A bottle of wine, maybe? Or even a grand or so if you’re really lucky? Not quite on the same level as Leicester City FC chairman Vichai Srivaddhanaprabha, who today has delivered 19 BMW i8s to his beloved players who helped lead his team to a very unexpected championship win this year.

19 BMW i8 ready for the players following last season’s triumph. What a chairman.

Players were initially promised Mercedes B-Class Electric Drives (Srivaddhanaprabha is clearly an EV fan), but the main man pushed the boat out and surprised his players with these £100,000 beauties, all finished in the team’s blue, accumulating in a value of nearly £2 million.

This generous gift comes on top of a £6.5 million bonus which was dished out between the lucky players, who don’t exactly have to scrape around to pay their bills on their base wage, we might add.

The BMW i8 features a plug-in hybrid powertrain comprising a 1.3-litre, three-cylinder petrol engine mated to an electric motor and battery, offering up 0-62mph in 4.4 seconds to make it one of the fastest BMWs in the range. As it’s a hybrid, it can also offer well over 130mpg if driven carefully. Oh, and it looks absolutely stunning, of course… 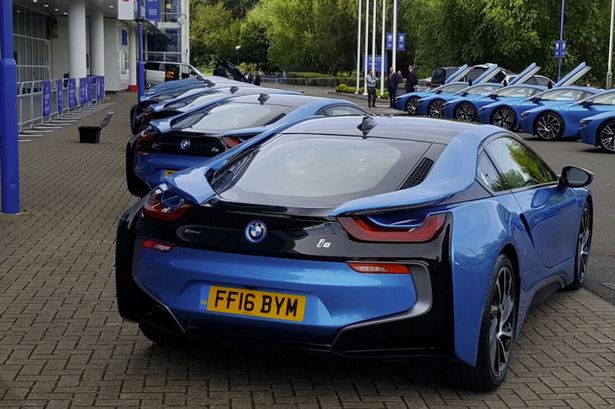 It would be easy to feel sorry for Leicester City’s chairman Vichai Srivaddhanaprabha after splashing out such a huge amount of cash. But with a net worth of approximately $3.2 billion, he ranks as one of the top five richest Thai people in the world, so we’re pretty sure he can spare a few bob. He also clearly has fantastic car taste. Let’s just hope his players are as fast and efficient as their new i8s…