Day one of two at the London ePrix, and we certainly weren’t short on action, as Sophie Barker explains…

With the final race of the Formula e season just tomorrow, the championship leaders had to do everything they could to put themselves in the best position. But, it wasn’t as easy as they would have hoped.

As the lights went out, Prost shot off the line as Senna and Frijns both suffered a little wheel spin. Surprisingly, everyone made it through the first corner in tact. Abt had a terrible start, losing two places as Vergne and Bird flew past him. Despite teaming up to pass Abt, the Virgin teammates were not about to play friendly with each other. As the obviously quicker Bird went

for a move on the Frenchman, he defended in a rather feisty way which almost caused them both to take each other out. And, as everyone knows, the golden rule of racing is to never crash with your teammate. As the pair carried on squabbling, Abt wound up hitting Bird but no damage was caused to either car.

After a shabby qualifying – largely due to rain and a wet track – Buemi was hunting down Di Grassi. The Swiss driver passed Duval – who had a pretty awful Saturday – and found himself right behind his championship rival. But, Di Grassi was having none of that and proceeded to pass Heidfeld into the Millennium chicane. Only, Buemi wasn’t going to give up. He too passed the Mahindra as Di Grassi put pressure on his teammate. Abt relented quickly and became what was essentially a moving road block – making Buemi’s day as hard as possible.

Buemi could have been a millionaire with the amount of dummies he was selling the German as he fought hard to get past. Abt’s chances of holding him back were made slightly harder when he was given a black flag warning for weaving in front of the e.dams car, rather than picking a line and sticking to it. While these two driver fought it out, Di Grassi closed in on Bird, who was being held up by Vergne, who was being held up by Frijns – yet another moving roadblock.

Eventually, the Abt driver took the inside line and threw the car past Bird. Buemi attempted to follow through by taking Abt and Bird at once, but nearly ended up taking out himself and the German. Abt passed Bird too, but began playing a silent version of musical positions and gave him it back. It’s safe to say that Abt and Buemi weren’t going to be the best of friends after the race. Finally, Buemi found his way past Abt and carried on hunting down Di Grassi. 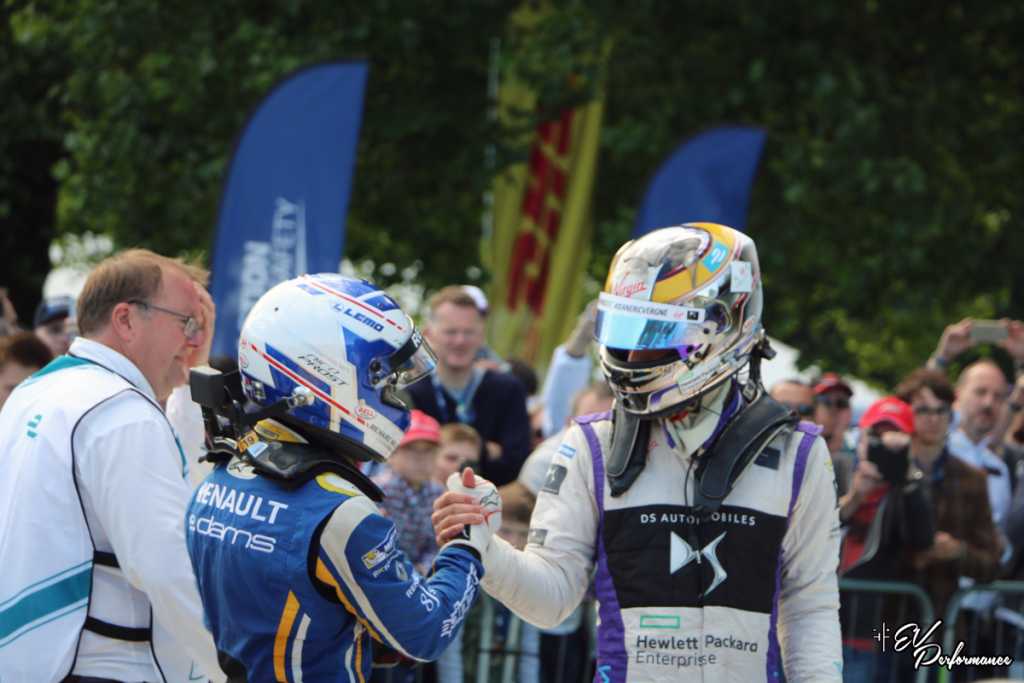 As per usual, the pit stop changed the order of the front runners. As Bird lost two places, Buemi found himself back behind Di Grassi – with no roadblock in the shape of his teammate to help him.

As had happened during qualifying, the heavens opened; in true British style, the rain began to fall. The cars run on all weather tyres so, unlike other forms of motorsport, there was no mad dash for wet or intermediate tyres, but it feels as if you’re driving on ice. The rain only fell at certain corners of the track, but it was enough to start the carnage.

Di Grassi passed Frijns – who had given up on being a roadblock, but Buemi managed to emulate the move a few corners later. The two championship rivals were shadowing each other throughout the remainder of the race.

As Abt went for a bold move on Frijns, the two touched, sending the German sideways and collecting the Dutchman too. Both were out on the spot as the safety car was deployed. After three laps it was brought back in and late race carnage unfolded. Di Grassi went to overtake Vergne – who was now the roadblock – but Vergne hit the championship leader, almost spinning him.

Buemi managed to get some sort of overlap on his rival but he couldn’t make a move stick. But Di Grassi had front wing damage and – as we learnt in Berlin – the stewards don’t like any parts hanging off the car. As we waited for the inevitable ‘meatball flag’ the wing dislodged itself and fell off, almost hitting Buemi in the process. A frustrated Buemi used his Fanboost to try and pass the Brazilian, but nearly ended up in the chicane wall instead. As per usual, he began shouting French down the radio – he normally lets his frustration get the better of him in these situations.

Turvey ended his race in the wall… on the penultimate lap after looking like a podium contender. Bird overtook Buemi as the yellow flag came out but wasn’t told to move over and give the place back. He needn’t have worried though – his car slowed down two corners off the finish line, handing two places back as he got back up to speed.

But the race was dominated by Nico Prost who took the checkered flag from Bruno Senna and Jean-Eric Vergne.

The final race looms – who will be crowned Formula e season 2 champion? Let’s find out…

(Check out our photo album from this race here.)