London ePrix: Going Out With A Bang in Battersea

As the FIA Formula E season culminated in a double-header in London’s Battersea Park, the championship was down to a hypothetical coin-flip; the consistency of Lucas Di Grassi’s podium record and his undeniable race-craft, versus the unquestionable speed of Sebastien Buemi. What followed was a weekend of frayed tempers, first-lap collisions, and a championship that would come down to the smallest of margins.

As race one dawned, the tension between the protagonists was palpable, with a single championship point between them. Saturday’s wet qualifying had shuffled the grid order, leaving Di Grassi 10th and Buemi in 12th. Though Di Grassi held two places over his rival, the Renault e.Dams of Prost sat in pole, poised to help his team-mate, and deny Di Grassi crucial points. Those who the rain favoured saw themselves in strong positions, with Senna joining Prost on the front row, Turvey in third, and Frijns fourth. Bird, the only other driver with a mathematical chance of winning the championship, lined up in seventh.

As lights went green, Nico Prost maintained his lead, with both championship contenders gaining a place by the first corner. Sam Bird swiftly passed Daniel Abt into 6th, costing ABT Schaeffler Audi Sport points in their battle for the team championship. Di Grassi began to hound Heidfeld in 8th, keen to carve his way up the pack. A game of cat and mouse followed, with Buemi executing a late-braking pass on Duval, leaving the championship contenders nose to tail. Di Grassi answered with a pass on Heidfeld, before Buemi also dispatched the Mahindra, leaving them in 8th and 9th. 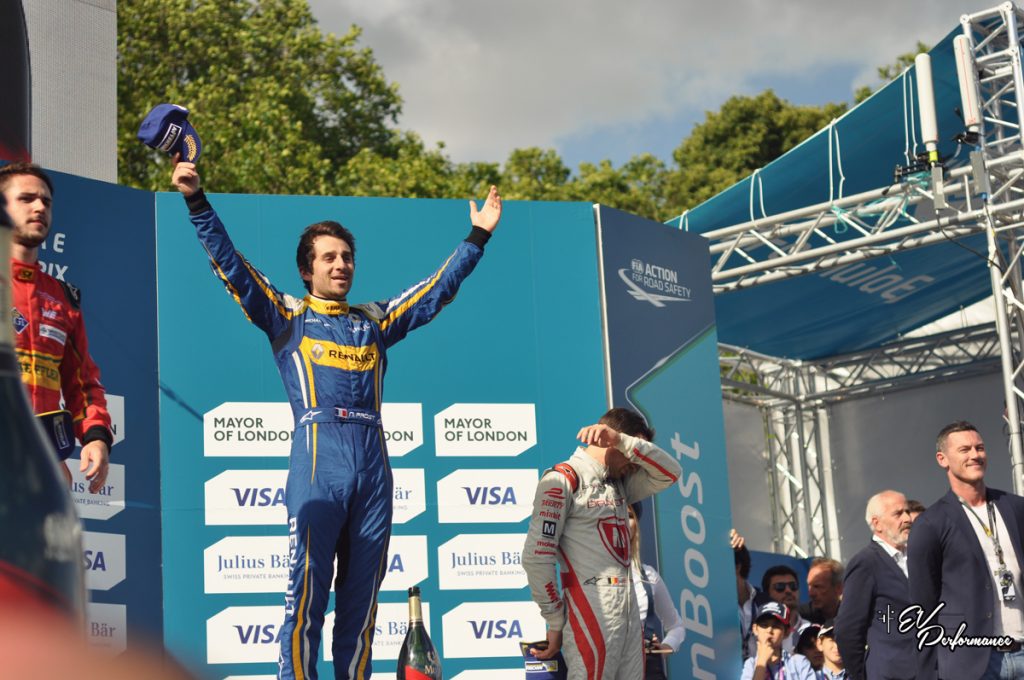 Crucially, Di Grassi then passed his team-mate, handing Abt the task of keeping Buemi in check. Buemi’s charge began immediately, selling Abt dummies to force him off the racing line. Keeping Buemi behind saw Abt receive a warning for weaving, and it was clear this was to become a test of patience on the part of the Renault e.Dams driver. With the pit window nearing, Di Grassi executed a beautiful pass on Bird, to take 6th.. Less successful was Abt’s attempt at the same manoeuvre, a clumsy pass on Bird almost taking out his teammate. Bird’s race began to fall away from him as he was easily passed by Buemi. This left Abt between the two championship contenders again, but this time Buemi made the pass immediately, leaving he and Di Grassi in 6th and 7th as the pit window opened.

Frijns proved a casualty of a slow pit stop, allowing Vergne to take 4th, and Sarrazin lost 30 seconds with his Venturi in the wrong power setting. The lead remained unchanged, from Prost, Senna and Turvey. In a circuit known for difficult overtaking, the championship contenders made it look easy, both passing Frijns within two corners, and moving up into 5th and 6th. As light rain began to fall, 8th place Abt struck the wall while attempting to pass Frijns, colliding with him on the rebound, ending both their races, and bringing out the safety car.

As the race went green, Buemi’s began to hassle the rear of Di Grassi, who in turn harried Vergne for 4th. As Vergne defended, Di Grassi dived up the inside. Vergne’s aggressive closure saw contact and Di Grassi’s front wing came loose, lodging itself under the car, and almost seeing him lose a place to Buemi, as the Renault driver immediately deployed his fanboost. As his pod detached, Di Grassi avoided the black and orange flag, and despite understeer, showed his skill by continuing to keep Buemi in check with some tense wheel-to-wheel racing.

As the race entered the closing laps, third place Oliver Turvey began to struggle with energy management, allowing Vergne to close the gap, while Buemi pushed Di Grassi at every corner, but was not able to make a pass stick. Disaster then struck for Turvey in his home race, as a lock-up saw him in the wall. Bird caused momentary controversy, overtaking Buemi under the yellow flags caused by Turvey’s accident, but the Brit fell back in the final lap, down to 1% usable energy, returning the position to Buemi and losing another to Da Costa. Nico Prost crossed the line to a flawless win, with Senna and Vergne making the podium places, and Di Grassi and Buemi in 4th and 5th. 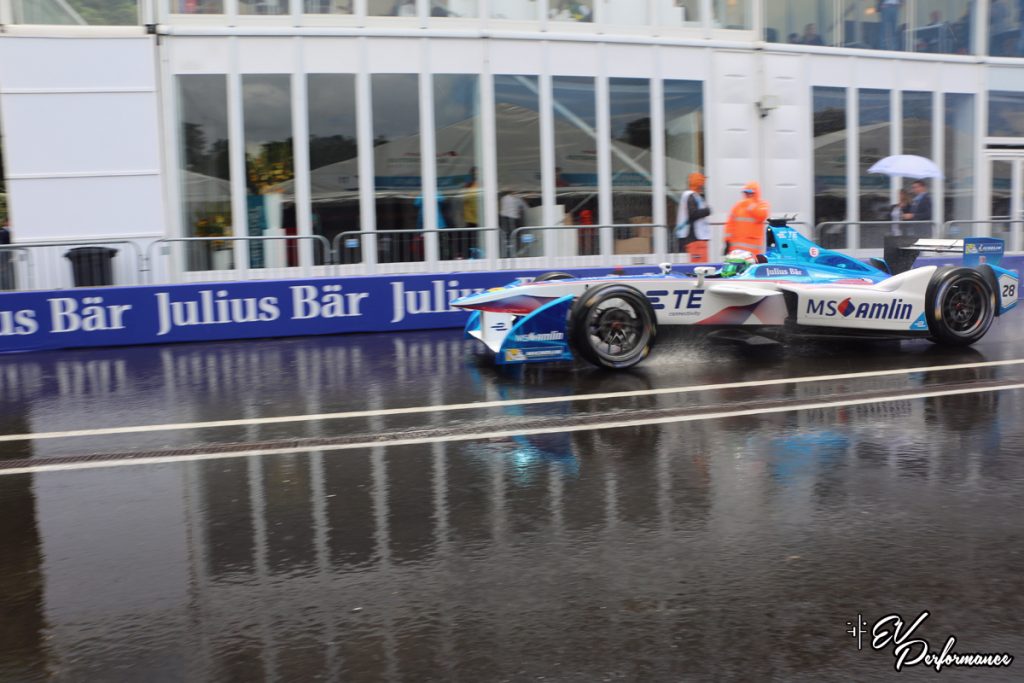 As the championship entered day two, the title contenders were effectively in a race of their own, on an identical 153 championship points, with Renault e.Dams holding a 37 point lead in the team championship. An excellent qualifying session for Renault saw them occupy the front row of the grid. With Buemi on pole, and Prost between as a buffer, this struck an early blow to third place Di Grassi, who was more than aware of the superior speed of the e.Dams car.

Merely 15 seconds into the race, drama struck; the championship contenders were out. Attempting an overtake on the outside of Nico Prost, Di Grassi slammed into the rear of Buemi at turn 3, leaving both cars in the run-off area. As it stood, if neither continued, Di Grassi would be champion. With a track-facing car, Buemi recovered quickly, minus his rear wing, while Di Grassi limped back to the pits with no front wing and a front wheel severely out of alignment. The crash saw Buemi drop to 13th and Di Grassi 18th. As the cars pitted, it became clear that neither had to finish the race; it would all come down to who could take two championship points for fastest lap. The dramatic collision left Prost leading, from Heidfeld, Abt, Turvey, and Bird.

Buemi appeared calm on team radio, while Di Grassi immediately claimed the Renault had braked early, leaving the accident unavoidable. As Di Grassi pitted, Buemi received the black and orange flag, and the Renault e.Dams chose to ignore repairs in favour of putting Buemi into the second car. As action recommenced, Di Grassi rejoined a lap down, while Buemi chose to bide his time in the garage. As Di Grassi found himself with a clear track, his fastest lap was far short of Buemi’s best, and his attempts were scuppered as the DS Virgin of Bird lost power and stopped on track, returning the race to safety car conditions. 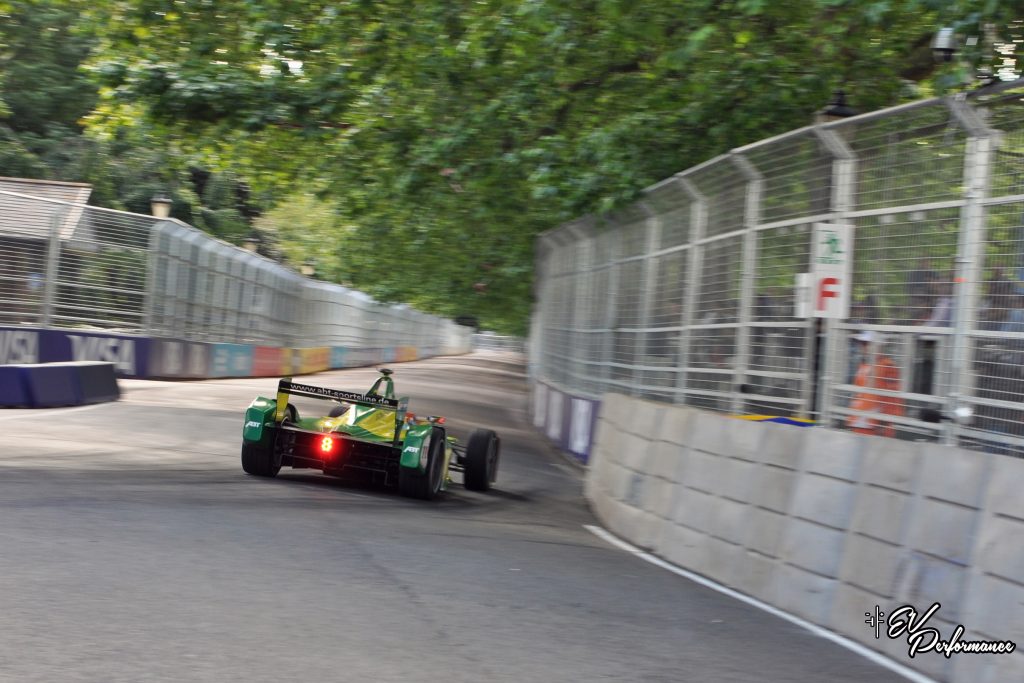 While Di Grassi chose to wait in the pits once again, the mid-field were not be outdone for action, as a four-way tussle between Da Costa, Senna, Frijns, and D’Ambrosio saw the latter pair collide with the rear wing of the Dragon car the casualty. Dragon’s weekend continued eventfully a lap later, as Duval forced Frijns into the wall, leaving the MS Amlin Andretti stranded on track, and bringing out another safety car. This left Buemi the same issue as Di Grassi, having just attempted to set his fastest lap but forced to abort, and the Renault e.Dams once again returned to the pits.

As the safety car came in for the third time, leader Nico Prost disappeared into the distance once more, while second place Heidfeld began to drop back into the clutches of Daniel Abt. As the pit window neared for the rest of the field, Abt made a lunge up the inside of Heidfeld, and moved himself up into second place. Buemi smartly headed out as the pack pitted, hoping for clear track to nail the single lap he needed to seal the championship. As the field re-emerged, the DS Virgin of Vergne had jumped Heidfeld into third, with Prost still leading and Abt second.

Despite traffic, Buemi finally set the fastest lap, but at 1:26, it was well within reach for his rival. As the game of chess continued, tempers began to flare, with Buemi accusing Renault e.Dams of being “amateurs”, with the team not advising him on where to make a clean lap. While Buemi’s emotions had got the better of him during the season, the Swiss driver appeared to take the initiative, and set a furiously quick lap of 1:24.582, throwing down a seemingly unbeatable gauntlet to his rival. Di Grassi immediately answered with a 1:24.934, but appeared at the limit of what the car could offer. 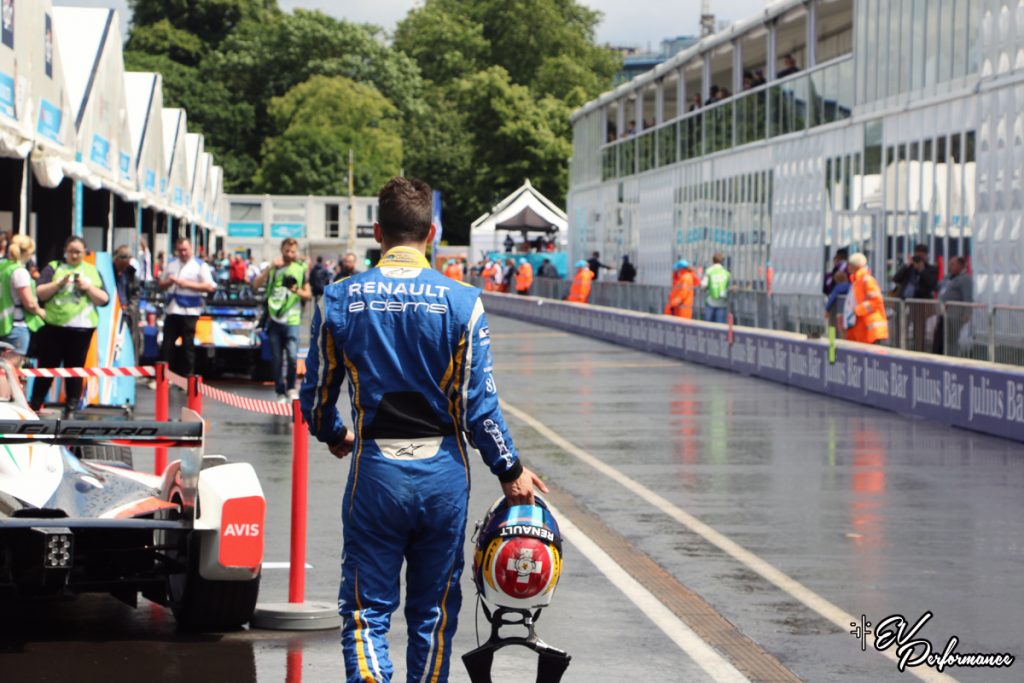 In the final laps of the race, all eyes were on the protagonists, as they attempted to grasp the all-important two points. As Buemi bided his time, having set the lap time he needed, Di Grassi began to lay down purple sectors. Despite a brilliant lap, Di Grassi could only manage a 1:24.633, short of Buemi’s best, and declared “that was it” on team radio. Not one to take a risk, Buemi mustered one final attempt to firmly seal his title, and put together a perfect lap to set a stunning time of 1:24.150. Di Grassi’s only response was to pit, and climb out of the car, finally conceding defeat.

As the Renault e.Dams team began to celebrate, Nico Prost took victory, finishing 7.6 seconds ahead of Abt, ensuring the team both drivers and team championship. However, the constant drama was not quite over, as the third through fifth place drivers – Vergne, Heidfield, and Da Costa – all hit 0% usable energy before crossing the line, promoting D’Ambrosio the final podium position. At the line, Sebastian Buemi took the Drivers’ Championship with 155 points, to Lucas Di Grassi’s 153. 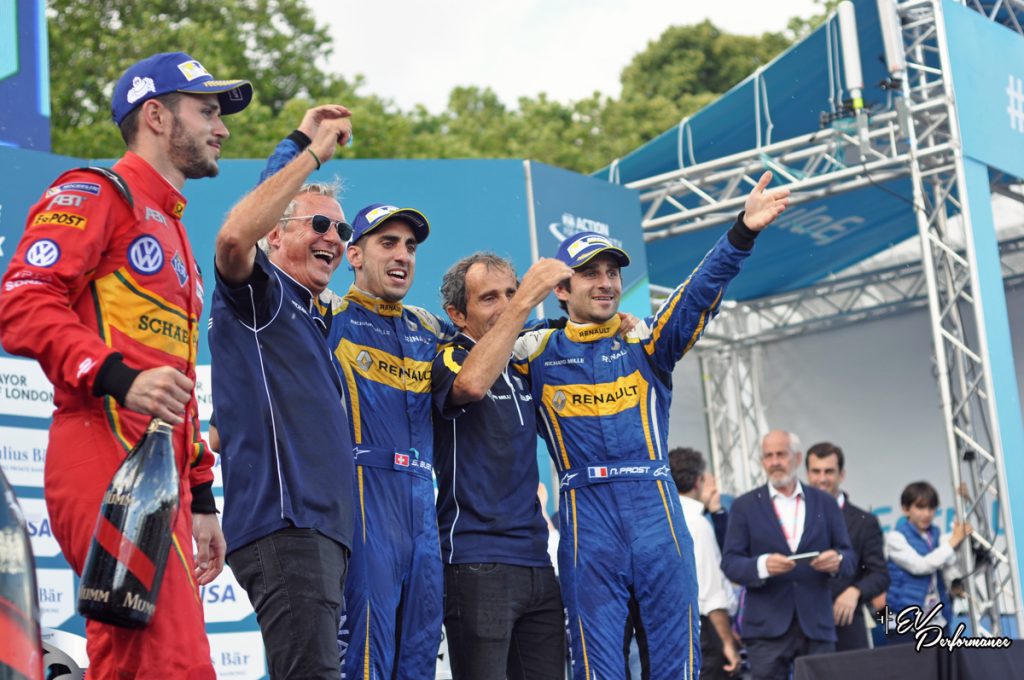 Some will be disappointed that the FIA Formula E championship was essentially decided by a single fastest lap, but in the end, racing is so often simply about speed where it counts. As the dust and disappointment settles, we can be sure of one thing. Lucas Di Grassi, now twice denied a championship in Formula E by a handful of points, will be out for victory. Beginning in Hong Kong on October 9th, and with a series of new venues on the FIA Formula E calendar, we’ll be reporting on all the action on track, as battle recommences in season three!

Stay with EV Performance, for all the latest updates during the break!