The next race on the Formula E calendar takes place at the glamorous Long Beach circuit in California.

The 2.1km course will see our drivers going head-to-head on straights, a chicane, sweeping turns and a hairpin as the second championship battle begins to hot up.

This season has been dominated by Renault e.Dams and Abt Schaeffler Audi Sport, with Virgin and Dragon sticking their noses in a little. As we have seen, Formula E is completely unpredictable, leaving us with not the slightest idea of who will be on top until the race has finished.

Renault certainly has the best package and will be up there and fighting for the win. Team Aguri have been off the pace recently with both drivers suffering software reliability issues throughout the race weekends. Will Dragon and Virgin find the pace to match the frontrunners?

As I say, we will only know when the weekend starts. Will Piquet Jr be able to match last year’s victory? With the pace that NEXTEV TCR has been showing during the season, I would highly doubt it. They have rarely gotten into the points. They certainly deserve a win though. Who will be on top in Long Beach? There’s only one way to find out… 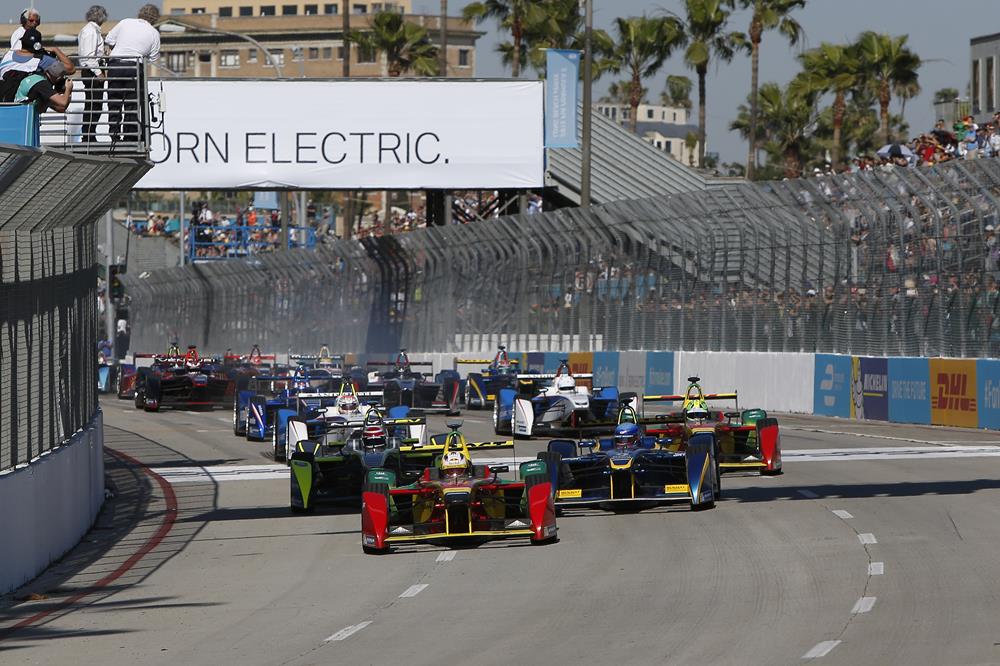 The inaugural race at Long Beach, this time last year, saw Abt Schaeffler Audi Sport driver Daniel Abt taking pole off the back of his first podium in Miami. Piquet Jr shot off the line, slid up the inside of Abt and never looked back. Scott Speed carried slightly too much momentum out of the first part of the chicane, letting his left rear lock up. During the second part, he drifted over the curb and ended up in the wall.

With a backed up field – the Qualcomm safety car just about to pull in – Piquet took advantage of the restart and began to pull out another lead. Prost lost out to Vergne on the restart, then Di Grassi too passed the Frenchman. Charles Pic made an interesting move into the hairpin, T-boning Jarno Trulli’s Trulli (confusing name, I know), putting the Italian out of the race and landing himself a penalty.

The safety car was deployed once again. As the I8 pulled back off, Daniel Abt was caught in a heated battle for second place between teammate Di Grassi and Vergne. The German pitted first on lap 22, but couldn’t be released as everyone else pulled in for their stops a lap later.

He then used more than the established 150 Kilowatts of energy allowed and was forced to make another stop to take a penalty. This dropped him down the order and out of podium contention. There was a sense of deja vu as Nelson Piquet Jr crossed the line to take his first win at the same track in which his father did the same.

Will this year’s race be as action-packed? We’ve got a feeling it will be…