Meet the EV adventurers: exclusive interview with Plug In Adventures

Chris Ramsey is the co-founder of the Plug In Adventures brand – a small team of self-titled ‘EV adventurers’ which is performing some breathtaking feats in everyday electric road cars at the moment to raise awareness and reduce fear of their abilities.

We caught up with Chris and the team to discuss the past, present and future of Plug In Adventures…

EV Performance: Could you please introduce yourself?

Chris Ramsey: My Name is Chris Ramsey and I currently work in the oil and gas industry as a manufacturing supervisor, which might sound strange for an EV driver, but working in this industry is what got me into electric vehicles. I am also the co-founder of Plug in Adventures and what we like to call an ‘EV adventurer’.

EVP: You recently succeeded in an epic EV voyage – John O’Groats to Lands End and back again (1762.4 miles) in just over 48 hours. In a fully electric Nissan Leaf. Can you give us the back-story as to how this plan formed?

CR: The John O’Groats to Lands End voyage was always in my head since 2013. It is such an iconic route in the UK and seemed more fun than my original idea as a youngster of running it!

So I teamed up with Jonathan Porterfield from EcoCars in Orkney; a very good friend of mine whom I first met back in 2013 when we drove all three UK mainland capitals in four days in a Nissan Leaf.

Jonathan also had the same desire to drive this route, so we began planning the charge route using a combination of Zap Map, Charge Your Car and Ecotricity websites which took about one day to ensure we had back-up locations just in case, spoke with the press team at Nissan HQ about using a press car (Nissan Leaf Accenta) and then set a date.  Planning for a trip like this is a lot easier than what some people might think; the real challenge is obviously the drive itself.

EVP: What was the message you were trying to spread by undertaking this journey?

CR: The aim was to demonstrate to the public, and people on the verge of purchasing an EV or even PHEV, that the UK charging infrastructure has expanded enough and is reliable enough for long distance EV journeys to start becoming the norm.

Also that mass production, short-range EVs like the Leaf, Zoe and i3 are more than capable of completing long distance journeys. For too long now, peoples’ arguments have always been “there’s not enough charge points and they never work,” or “the battery doesn’t last long, so you can’t leave the city”.

Obviously, we could have used a Tesla Model S and absolutely smashed the record, but for us this would have been counter-productive as the majority of the British public cannot afford to purchase a Tesla, so the message would have been lost. 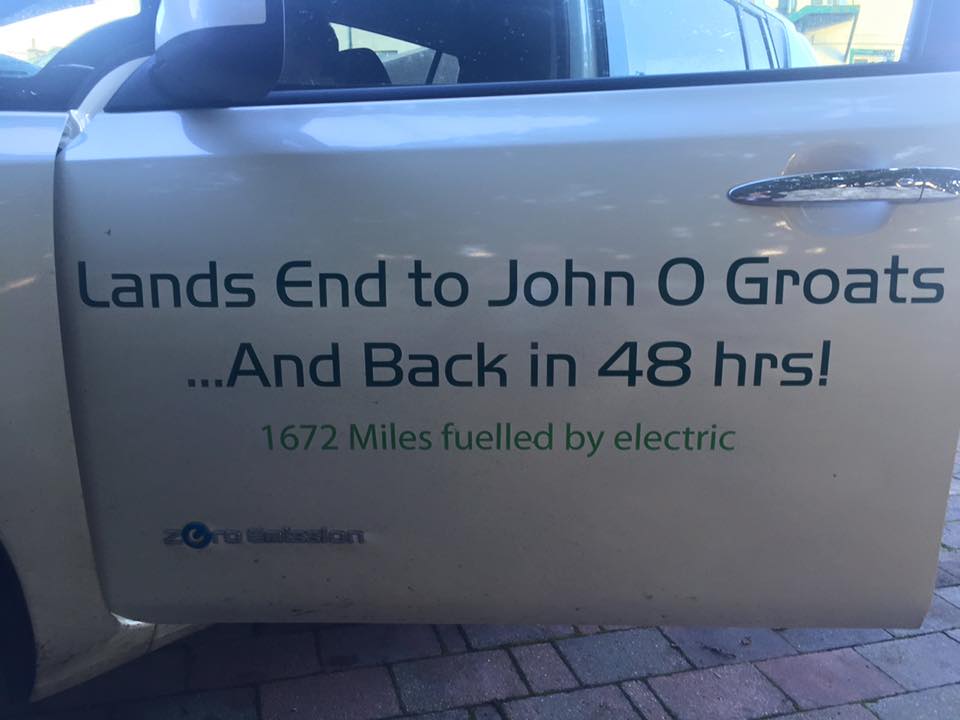 EVP: Are you strong believers in electric car technology?

CR: I am a massive believer in electric car technology, and battery technology for all types of electric vehicles for that matter and that is why I only own a Nissan Leaf and sold my combustion engine cars.

The reality is that EVs and PHEVs are never going to completely replace combustion engine vehicles, but they will go a long way in offsetting the impact of the Co2 emissions that combustion engines are having on this planet.

There are massive strides being made in new battery technology which will see ranges easily increase to at least 500 miles by 2020 and with the introduction of the Tesla Gigafactory and the British EV battery factory rival being built over the next few years, EVs will get even better.

EVP: How do you think the electric car market has developed over the last decade?

CR: The EV market globally has developed better than could be expected in my opinion; mainly helped by massive adoption in Scandinavia and U.S. and Nissan’s determination since 2012 to make EVs household features, but I think the UK is still being hindered by negative press, along with the government and local authorities continuing to market EVs mainly to business users as a way for businesses to meet  eco targets or tick an environmental box. We really need to see more advertising and marketing aimed directly at the general public.

EVP: What do you think the future is for electric cars?

CR: The future for EVs is simple: a long one and this time round they are here to stay. More and more they will become an everyday site on city streets, and more importantly on UK motorways!

EVP: Do you have any other exciting EV missions planned?

CR: We most definitely do and too many to mention, however one will be professionally filmed in Jan-Feb 2016 in a very cold country… But that’s all I can say on this one for now as we plan to release it as a three-part film online during the course of a week.

Plug In Adventures will also be taking on its biggest ever challenge in 2017, when we aim to compete in the 80 Day Race. This will see us race around the world in 80 days competing against some very experienced adventurers and racing teams. We will be launching our website and crowdfunding campaign very soon, and I can exclusively reveal that one of the backers of our crowdfunding campaign will be selected (at random) as a winner of our Co-Driver Competition, which will see them join the team as the co-driver for one of the 80DR legs.

Another exclusive for EV Performance is that we have just finished filming a small piece on EVs for BBC Scotland which will be aired on Freeview in Jan 2016 and once channel/date is confirmed we’ll let you know more. 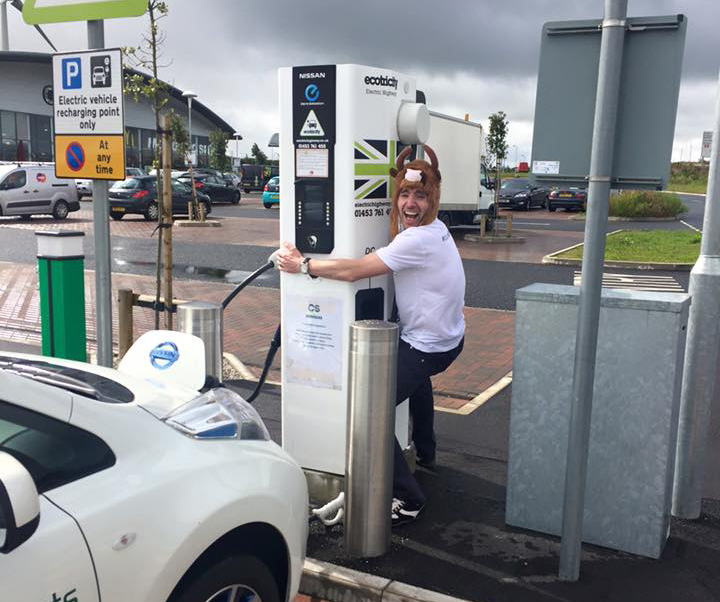 EVP: What EV are you most looking forward to seeing in the flesh?

CR: I would have said the Rimac Automobili Concept One, but I was lucky enough to come face-to-face with it recently and it was stunning!

So I have now set my sights the Honda CR-Z EV, as I am a massive speed junkie and although in the prototype phase, this car is all-wheel drive and has around 350bhp. For a small, lightweight car like the CR-Z, it is going to be unbelievably fast car and knowing Honda it will handle and drive brilliantly.

EVP: What do you think the biggest limitation is at present in the world of electric cars?

CR: I would say support for smaller EV manufacturers. The big manufacturers will continue to make EVs and introduce bigger ranges into the marketplace, but at their own pace and to suit their agenda.

Telsa proved a few years ago that the technology was already out there to produce long-range EVs, and I think there should be more done in each country to help smaller niche manufacturers to introduce cost effective rival models into the market sooner.

As I previously mentioned, the EV battery factory getting built in the UK will be a great help. However my experience with talking to UK government departments and funding bodies is that they always want projects to involve one of the big manufacturers, which kind of defeats the object of setting up niche vehicle support in my eyes, as it still allows the big manufacturer to control what gets into the market and when.

You can find out more on Plug In Adventures by heading over to its Twitter page.