With Oliver Turvey promoted to pole, after Daniel Abt’s demotion for tyre pressure infringements, and championship leaders Buemi and Di Grassi languishing down-grid, the Mexico City ePrix promised excitement. And it delivered. In the longest Formula E race to date, Lucas Di Grassi romped home to win a thrilling strategy-dependant race, and closed his title fight deficit to five points from rival Sebastian Buemi. Despite starting at the back of the grid, losing his rear wing in the first lap, pitting twice, and finishing 70% race distance in one car, Di Grassi was victorious in a masterclass of strategy, skill, and determination. Jean Eric Vergne and Sam Bird rounded out the podium places, after a thrilling race-long battle with Jerome D’Ambrosio, who ran out of usable energy in the penultimate lap, denying him second.

Initial pole-sitter Turvey’s potential race win was ruined when a battery issue caused his car to stop on track, leaving him unable to re-cycle his NextEV, and retiring from the lead. Mitch Evans narrowly missed out on his first podium for Jaguar, in a perfectly controlled drive to finish P4, with Prost in P5, Lopez in P6 – after a T1 spin ruined a potential race win, Abt recovering well to P7, and Carroll, Piquet, and Gutierrez rounding out the points positions. Both Mahindras lost out from points positions after a tap from Nico Prost saw Heidfeld spin and Rosenqvist helplessly collide into him. The black cat also struck at Andretti with a DNF for Da Costa, and a penalty for Frijns, after failing to meet the minimum pit stop time. 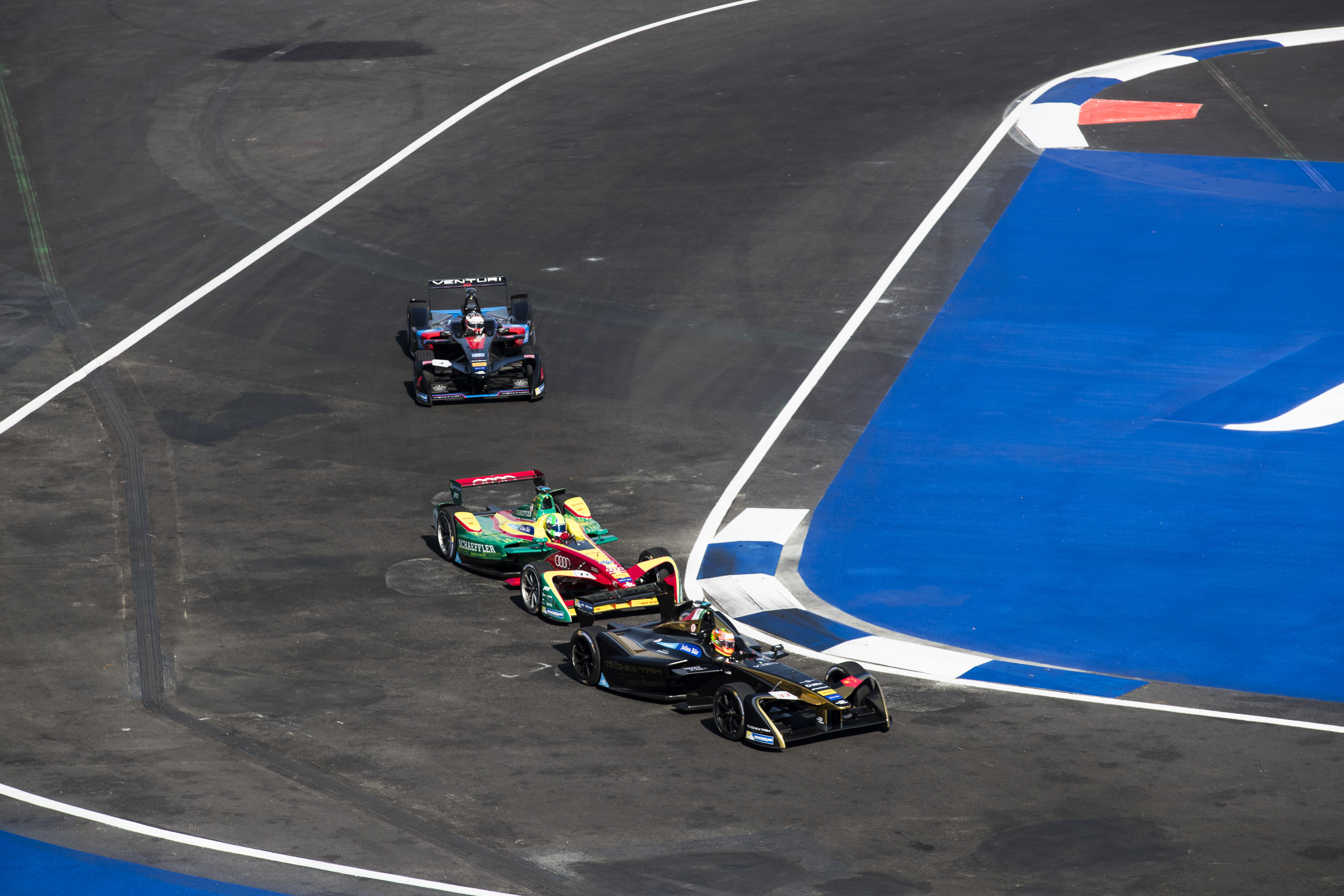 As the packed crowd watched the lights go green, Turvey and Lopez got a strong start from the front row, with third-place Vergne immediately challenging for second. While trying to dive up the inside of Lopez, the Techeetah lost a place to the Mahindra of Nick Heidfeld who cut a clean move around the outside while Vergne was distracted. With all the cars safely through T1, it was a T3 concertina that saw Venturi’s Maro Engel slam into the back of Di Grassi, damaging Di Grassi’s rear wing, and forcing him to pit. As the safety car was deployed as the debris was cleared, Sarrazin pitted to change cars, with the Renault e.Dams of Prost also pitting with front wing damage. The Renault e.dams rejoined in P14, with Di Grassi joining a lap down from the rest of the pack.

After several laps under safety car conditions, Buemi attacked as the race went green, passing Rosenqvist into P7, and immediately hassling the back of Bird in P5, setting a fastest lap in the process. Turvey remained race leader, but the DS Virgin of Lopez began to hound the rear of the NextEV NIO, with Heidfeld and Vergne close behind. The midfield were not to be outdone for action, with the Jaguar pair of Evans and Carroll tussling for P8 and P9, the Andretti pair of Da Costa and Frijns flying past Techeetah newbie Gutierrez in P10, and Daniel Abt making up positions to P12. With Turvey half a second clear of Lopez, disaster struck for the Brit, his NextEV slowing on the pit straight and grinding to a halt, handing the lead to the DS Virgin. 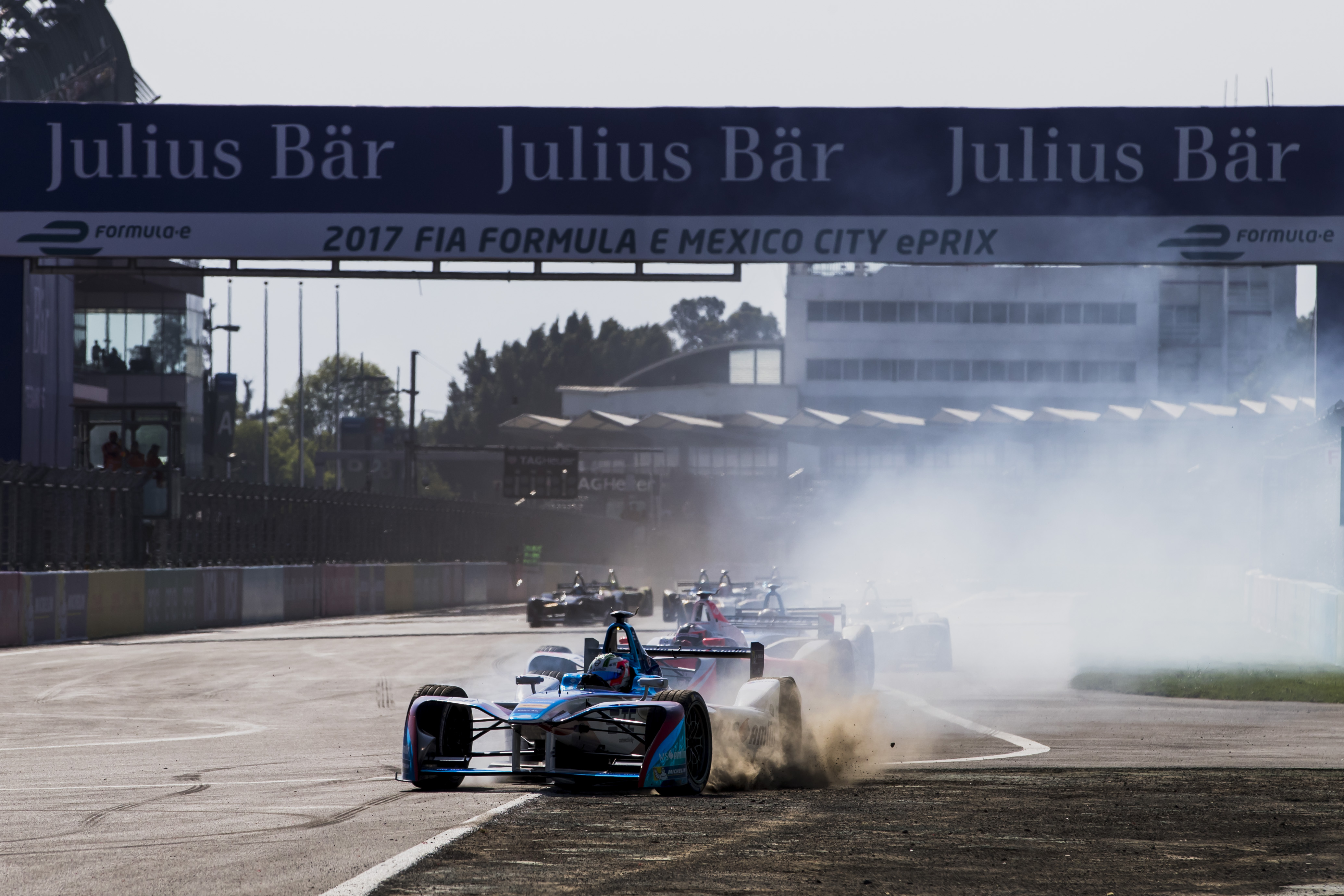 As the safety car was re-deployed for the stranded Turvey, Lucas Di Grassi and Jerome D’Ambrosio chose to pit on lap 18, the latter having collided with his team-mate Duval, both drivers changing to their second car with more than half race-distance left to run. This would prove a turning point. As the race went green and the pit window approached, the lead remained unchanged, with Lopez from Heidfeld, Vergne, Bird, and Buemi. All eyes were on energy management as strategy came into place, with Rosenqvist and Prost having the potential to stay out another lap. Third-place Vergne was the first to break rank and dive into the pits, despite having 6% energy remaining. As the remaining pack pitted a lap later, it became clear that the strategy had worked, the Techeetah flying down the straight as the pack exited the pits, with Vergne narrowly gaining a position on track. A poor stop for Heidfeld dropped the Mahindra from P2 to P9, with Buemi also losing out from P5, rejoining in P10. With Di Grassi and D’Ambrosio pitting early, the pair effectively led the race, from Lopez, Vergne, and Bird. With Di Grassi and D’Ambrosio on 60% remaining energy, the race became a gamble and a shoot-out; who could finish in front, with 16 laps to go?

After another safety car for the Dragon of Loic Duval, stopped and subsequently stranded on track, and a problem for the Andretti of Da Costa that saw his retirement, the race began to pick up the pace. Knowing the potential for a win if Di Grassi and D’Ambrosio were unable to finish, Vergne began to hound the DS Virgin of Lopez for P3. Closing in, but unable to make the move stick, Vergne’s frustration showed, as he pushed Lopez wide and forced him to cut a chicane. After some particularly blue radio exchanges, D’Ambrosio, Lopez, and Vergne formed an impatient threesome, each on the tail of the other, desperate to gain a potential race lead, should Di Grassi’s race-leading strategy fail. 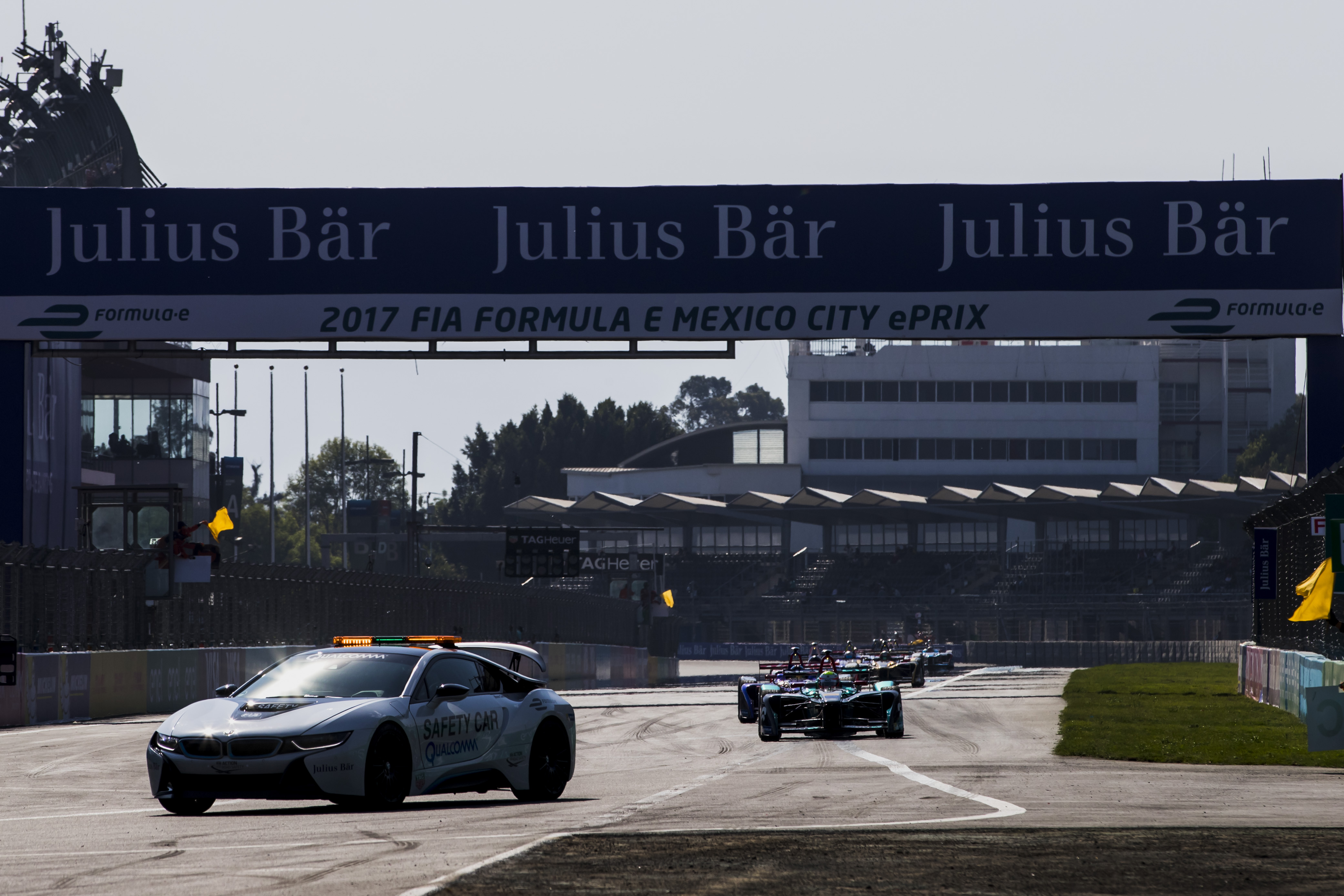 Pushing hard turned pressure into a costly mistake for Lopez, as the DS Virgin overshot T1 while trying to overtake D’Ambrosio, spinning off into the run-off area, and losing P3. Almost immediately, Sebastien Buemi mirrored Lopez’ move with an identical spin into the run-off, narrowly avoiding the stationary DS Virgin. With Lopez rejoining in P13, and Buemi P17, Di Grassi now led the race from D’Ambrosio, Vergne, Bird, Heidfeld, and Rosenqvist, the top five virtually nose-to-tail and hungry for a podium place, with Evans, Carroll, Prost, and Engel making up the top ten.

D’Ambrosio was a calm presence…

As the race entered the closing laps, D’Ambrosio was a calm presence, holding P2 despite a significant energy deficit from the eight cars harrassing him from behind. But just as the calm precedes the storm, lap 43 saw one more sting in the race’s tail. In a desperate last ditch effort, Vergne finally passed D’Ambrosio to take P2, with Bird following through on the rear wing of the Techeetah and making the pass stick, dropping D’Ambrosio down to P4. In the amphitheatre of the stadium section, fans were witness to a clumsy error from Prost, tapping the rear of Heidfeld’s Mahindra, sending him dramatically spinning into the path of team-mate Rosenqvist who was unable to avoid a collision, dropping both out of a points position, to rejoin in P12 and P15.

In the penultimate lap, with Di Grassi leading from Vergne and Bird, D’Ambrosio’s luck finally ran out, with his Dragon simply out of energy, dropping down the pack and out of the top ten, lifting Gutierrez into the final points position for his debut, and the first double-points race for Techeetah. As the pack approached the line, it was clear that Di Grassi had done enough, with smart strategy and remarkable energy management sailing him to victory in a remarkable race, breaking Sebastien Buemi’s season-long winning streak, and keeping his championship hopes alive.

Formula E now gives us all a much-needed breather, after that frenetic race, with the season entering the European leg, returning to the glamour of the Monaco ePrix, on May 13.