Production of the Tesla Model 3 to start this Friday

Elon Musk headed to Twitter to announce the first production model of the highly anticipated Model 3, is expected this Friday, 07 July 2017. The Model 3 is Tesla’s “Mass Market”car and the first 30 customers will receive their new Tesla’s on the 28th at a handover party, according to a Musk’s series of Tweets. Production is then expected to grow exponentially: 100 cars in August, more than 1,500 by September, and then 20,000 per month by December.

News of SN1 (Serial Number 1) came in a tweet on Sunday night: 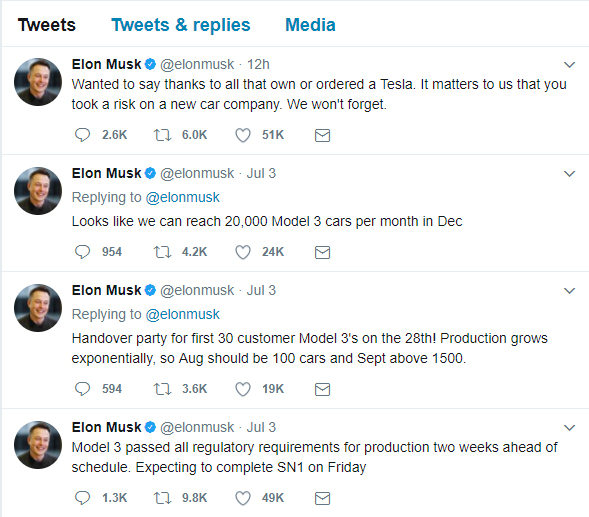 At the unveiling last year, Musk said he was “fairly confident” that deliveries will begin by the end of 2017, and “you will not be able to buy a better car for $35,000, even with no options.”

At a shareholder meeting last month, Musk said the first Model 3 customers would be limited in their ability to customise their orders — basically just colour and wheel type. “I should say that we’ve kept the initial configurations of the Model 3 very simple,” Musk said. “A big mistake we made with the X, which is primarily my responsibility — there was way too much complexity right at the beginning. That was very foolish.”

Tesla’s valuation depends largely on ability to sell his vision of sustainable, battery-powered driving to a much broader population. Currently the Model S and X, are both targeted towards the luxury market and unrealistic to the mass market. If Tesla are to secure a future they need to ensure the Model 3 fulfils it’s potential and floods the market, taking a piece of the i3, Leaf, Zoe and even combustion engine buyers.