Renault Twizy Review: Is it a bird? Is it a plane? No… it’s a Twizy!

Let’s start with something of a disclaimer: the Renault Twizy isn’t officially a car. Yes, it has four wheels and a steering wheel, but because of its limited size, weight and top speed, it is in actual fact rather curiously classed as a ‘quadricycle’. Now you’ve learnt something interesting, let’s see what all the hype is about…

For me, a car needs to be practical, fast and comfortable; so when a windowless, one-and-a-half-seater car turned up for us to review, I was… less than excited it has to be said. I mean, I had to use this as a daily driver for the next seven whole days, travelling through all the elements, along country and city roads. All with a projected range of just 62 miles. But when it rocked up to my place with an air of confidence and style and swagger similar to Conor McGregor before a fight it forced me to think, ‘maybe this wouldn’t be the worst car I’ve driven…’

We were kindly loaned the Dynamique model, the ‘all the trimmings’ spec which came with home comforts like doors, floor mats, 13” ‘Diamond’ Gloss alloys and heated windscreen. Ours did fail to come with one rather essential part, however: windows  you can purchase this an optional extra – highly recommended).

Charging is easy as the Twizy uses a standard three-pin plug (yes, the very same thing you plug your toaster into) and will fully charge in 3.5 hours. I opted to park outside my front door and fully charge in the evenings before bed, which proved easier than turning bread into toast. 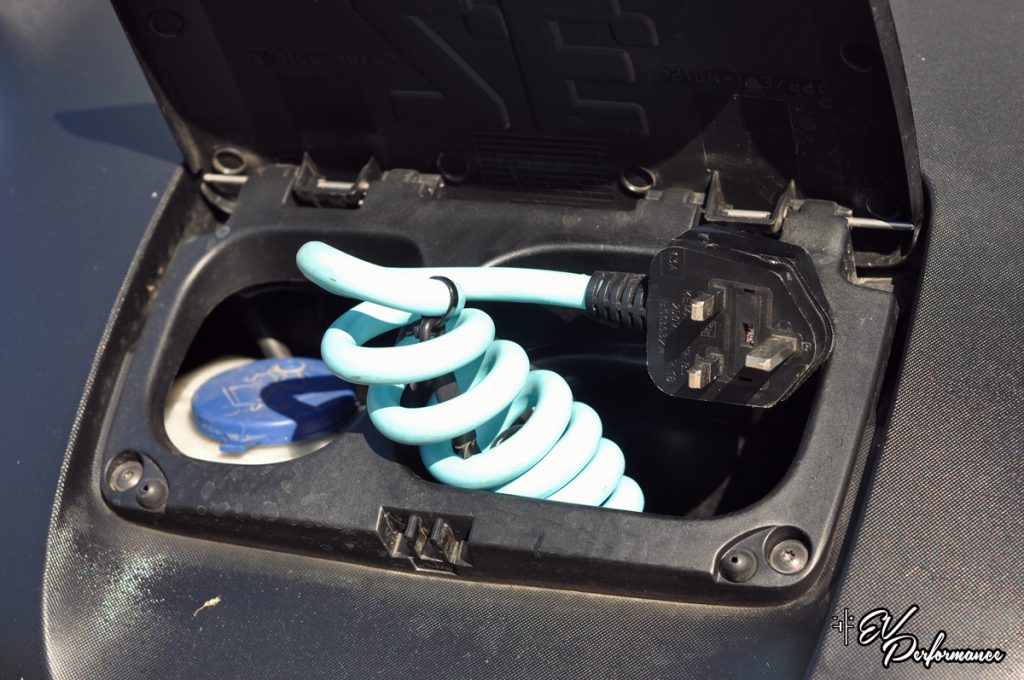 Practicality-wise, the one thing that really worried me was having no windows. I mean, what would I do if my hair got wet and messy?! Although on paper it seems like a ridiculous idea, Renault has managed to make the windowless lifestyle work: wind deflects around the body of the car, not into the cabin. BEWARE: you may get a little wet, but nothing a lovely poncho wouldn’t stop! If you’re lucky enough to be a passenger, the driver will give you extra protection from the elements, too. How generous!

Once you’ve climbed into the Twizy you’ll be rather surprised with the space around you, in either the front or the back seat. The dash is very minimal – don’t expect to be blasting the music as a stereo and speakers are strictly not included, but using my creativity I got a pair of Bluetooth speakers connected my phone and managed to effortlessly cruise with some Snoop Dogg.

The Renault Z.E. electric motor is powered by a lithium ion battery kicking out around 20bhp (I didn’t miss a zero, that really reads twenty brake horse power). But it’s not all about numbers with the Twizy. Once you put your foot down you’ll reach 30mph in just 4.4 seconds. Not quite a supercar, but with its humorous low-down power delivery and low top end, you’ll be flooring it everywhere with a big smile.

One massive thumbs up of the Twizy is the way its weight is distributed, and as such, the way it flies around corners. With its thin tyres you can really throw it around hassle-free. I found myself wanting to go around every roundabout I saw and take advantage of the lack of understeer, combined with that electric instant power. With a bit of practice you’ll be drifting around every roundabout and corner.

Comfortable or not comfortable? That is the question…

As mentioned, the cabin is ‘roomy’, well protected but doesn’t shield you from everything nature throws at you. The solid-looking seats don’t fill you with confidence at a glance, but mould nicely around you meaning you won’t miss those leather Recaro seats too much… until you meet your first speed bump, that is.

With a lovely set up to tackle corners at speed, the suspension really doesn’t enjoy bumps. When you see a pot hole, speed bump or something that isn’t a smooth surface, brace yourself. Some will argue it’s far too hard but others will say it enhances the driving experience, all I’m saying is be prepared…

So did the Renault Twizy fly like superman? And walk the walk? Hell yeah! If you’re looking for something small, fun and ludicrously low-cost, you couldn’t go to wrong with a Twizy. Doing a short commute, popping to the shops or looking to whizz around your mate’s for the big match, the Twizy will do it and leave you with a big smile! You’ll also become more popular as every time you take it out, as people stop and stare, wave and even give you high fives as you drive pass them, perhaps even more so than the attention you’d receive in a supercar! Whenever you park up, a crowd will gather to see what futuristic car you have just flown into the car park.

I must stress though this car is clearly designed as a second vehicle – going on fast roads, driving in the rain and snow and driving long distances you’ll need something a bit more substantial. Despite all this I loved it! Maybe next summer you’ll catch me rolling in a Twizy…

Finally, let’s do some donuts…

Not the most practical for long distances due to limit range, but it left me with a huge smile! Everything about this car screams ‘FUN’ from its quirky looks to it’s instant power and handling. This car sums up the phrase “Don’t judge a book by its cover”

The Renault 5 Prototype, unveiled in January, makes a...
Company News