The Grand Tour caused a bit of a stir last week when Richard Hammond was almost killed in another terrifying car crash while filming the show’s second season.

The crash occurred at Hemberg Hill Climb in St Gallen, Switzerland, while filming a segment from one of the trio’s infamous races. The incident saw the Rimac approach a left hairpin turn, skidding sideways, before rolling down the hill. Hammond climbed out of the car and got to safety before the car burst into flames, leaving nothing but a charred wreck. Hammond suffered no serious injuries other than a fractured knee and was airlifted to hospital, where he was kept in for surgery and observation overnight.

No one is quite sure what caused the crash but it could be down to Hammond’s inexperience of the how much power the electric car had to offer.

The car in question was a Rimac Concept-One, rumoured to be worth £2million. The Concept-One is one of the most powerful cars in the world right now, producing an estimated 1224bhp and 1600Nm of torque. This amount of power enables the Rimac to move from 0-62 in 2.5 seconds, and onto a top speed of 221mph. What makes these figures even more substantial is that they are being produced by a fully electric car.

The crash caused a lot of worry and panic for the crew of The Grand Tour. Andy Wilman, Producer for The Grand Tour, described how James May and Jeremy Clarkson ran to the site of the incident, and thought Hammond had died when they reached the flaming, upturned wreckage. Thankfully Hammond was okay and it wasn’t long before the cast and crew took to social media to let the rest of the world know. Several crew members posted pictures of Hammond in his hospital bed laughing and joking with his co-presenters. 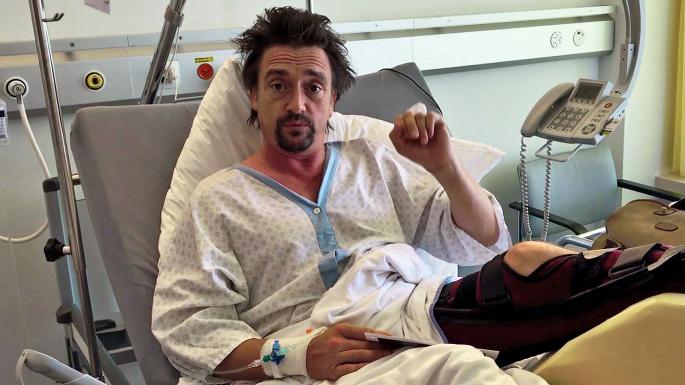 Rimac Automobili has not released a statement as to what it thinks caused the accident or why the car burst into flames, but has wished the very best of luck to Richard in his recovery. The crash is still being investigated by Rimac and other agencies to work out exactly what went wrong, but driver error has not been ruled out.

Eleven years ago, Hammond was involved in a horrific accident involving a jet powered drag racer which flipped at 280 miles per hour and put Richard into a coma for 2 weeks, almost ending his career at the same time. Hammond was also in the headlines earlier this year while filming The Grand Tour. He fell from his motorcycle while filming in Mozambique. Hammond sustained superficial injuries, but was knocked unconscious. However within hours Hammond tweeted fans saying “I can confirm that yes, I fell off a bike, many times, in fact and yes, I banged my head and everything else. But life goes on (sic)”

Filming has been suspended until Richard is fully recovered and able to resume work on the series.

It's not something we thought we needed, but today,...
The Buzz

Rimac Nevera: An in-depth look at this hypercar masterpiece

The announcement today that hypercar manufacturer and electric technology...