Once again, Sophie Barker brings us a more personal side to Formula E, with her report on yesterday’s action-packed Argentinian race…

For the first time this season, Sam Bird was starting in pole position. To top off that achievement, he got a flying start to stay there as everyone jostled around behind him. Simona De Silvestro made a kamikaze-style move into turn one, resulting in her going five-wide with various other drivers. She locked up but managed to stop the car before it hit the barriers. Buemi, who was living the backmarker life, stormed past three cars just on the rundown to the first corner. D’Ambrosio got involved in a first-lap scrum before pitting for some minor repairs. The right rear wheel-gun became way too attached to the wheel so Jerome almost drove off with it still in. After a swift kick from a mechanic, he was free to go racing again.

Daniel Abt was feeling the testosterone levels rising, getting involved in a heated battle with Duval, who managed to overtake. Then Vergne, who had suffered a bout of food poisoning, decided he wanted a slice of the action and found a way around the German. Then Abt found a way around Vergne… who eventually passed and made the move stick. Buemi – now living the midfield life – made a quick, tidy move on Daniel, who was quick to fight back but couldn’t get past.

Nelson Piquet Jr began a fast decline down the order when the majority of the field began passing him. From a viewer perspective, it looked like he had just given up. But it seemed like a nightmare of a race for the current Champion.

Da Costa was last found parked in a dangerous place with a software glitch at this stage. After running in P3 for the majority of the race, it was a disappointing sight. But, at Antonio’s expense, the safety car changed the face of the entire race. Everyone had no choice but to take to the pits. Nico Prost was acting like a snail, coasting the car into the pit lane with Di Grassi tapping him on the rear. Buemi then got stuck behind his teammate and almost undertook him into the garage.

As soon as Buemi was ready to make a move on Sarrazin, the safety car was deployed. So, the Frenchman took a leaf out of Prost’s book and began acting like a snail. It seemed as if he thought they were under Full Course Yellow conditions and not the safety car. It turned out that his radio wasn’t working, so he had to guess what was going on. After several moments of Buemi waving his arms around, trying to push the Venturi car with air and screaming French down the radio, he realised what was going on and sped up.

During the final few laps, Bird seemed to be enjoying a little bit of sideways action. But, with Di Grassi having just been passed by Buemi, he was starting to feel the pressure. After a few laps of keeping the Frenchman bottled up behind him, it was a relief for the DS Virgin driver to see a marginal gap forming and Sam came home with the win. 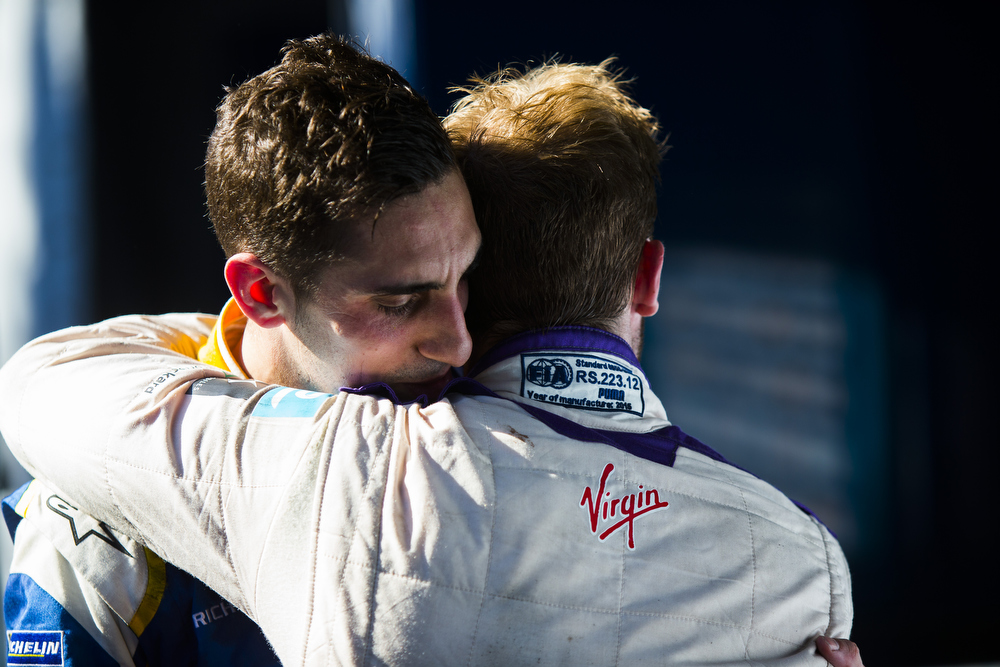 Di Grassi was a naughty boy on the podium, forgetting to take his cap off on while the British national anthem played. Thankfully, Sam noticed and gave him a finger waggle and a ‘tut tut tut’.

So, Bird is slowly coming back into championship contention. Can he take flight in his fight? Or will it be left up to Buemi and Di Grassi?

Find out in Mexico…