Tesla’s new Model 3 saloon was handed over to its first customers at a launch event at the Fremont factory on Saturday.

Boss Elon Musk was on hand to explain the finer details of the car in front of an audience of Tesla employees who helped to build the Model 3.

The entire presentation was powered by a Model S battery, which powered a projected screen onto the side of the factory building.

To finish the event, the first 30 cars built were lined up outside the factory and handed over to customers.

The 3 is intended to be Tesla’s entry into mass production, with 500,000 orders already placed. It sits below the Model S and X in the range and will compete with cars like the BMW 3 series and Jaguar XE.

Musk revealed that the 3 has all the hardware needed for full autonomy as the Autopilot system featured in the Model S and X has been further developed. He said the driver could ‘watch a movie, talk to friends or go to sleep’, if the law allowed it, of course. 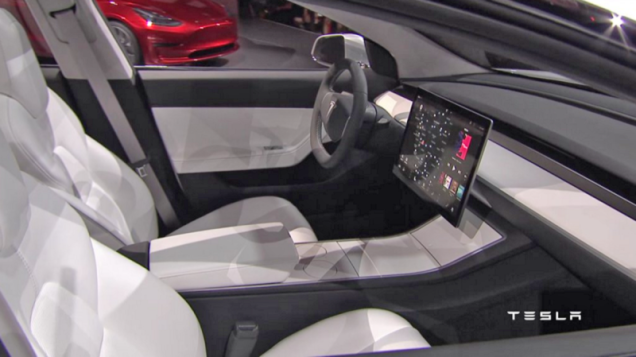 10,000 new parts have been engineered for the Model 3. Musk said it had to be easier to build in order to increase the amount of cars the company makes per year: “We’re going to be in production hell.”

Musk also promised to triple the amount of superchargers available to Tesla customers, which can charge a flat battery to 80% in just 40 minutes. However, it is likely that Model 3 owners will have to pay to use the superchargers.

With such a long waiting list, right-hand-drive versions of the Model 3 are not expected until 2019.